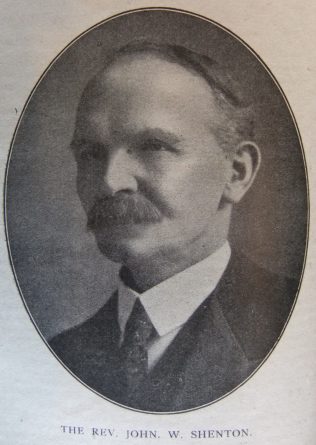 John was born in 1873 at Silverdale, Staffordshire, to parents Job and Mary Ann. Job was a coal-miner. John also worked as a coal-miner before entering the ministry.

John earned a high place on the ‘Reserve List’; consequently he went straight into circuit work.

John’s obituary recorded that those who sat under his ministry testify to his intimate knowledge and love of the Bible. His keen insight and vivid imagination enabled him to portray Old Testament characters with compelling interest, and his practical turn of mind made it possible for him to relate their lives and teaching to contemporary life and experience. But as much as he delighted in and valued the Old Testament, it was in the New Testament that he found his chief inspiration. He was held fast by the supreme revelation of God in Jesus Christ, and found in St Paul’s vivid conversion and subsequent glowing consciousness of the presence of the living Christ a parallel to his own experience. Converted in his teens, John felt he must tell others what Christ had done for him, and with a clear call to preach he was led to offer for the primitive Methodist Ministry.

Throughout his long term of service his evangelical zeal never ceased to glow within his heart. His evangelism, however, was directed and controlled by his alert and enquiring mind, his wide reading, and his eagerness to know and assess all the facets of knowledge and experience. He was a faithful pastor of the sick and needy, counting their wants to be the first claim upon him, after his pulpit preparation. He had a vivid imagination, a deep insight into men’s needs, an unusually strong gift of sympathy, and a keen sense of humour. He enjoyed his religion and his preaching and pastoral work were a delight to him.