A Champion of East Anglia 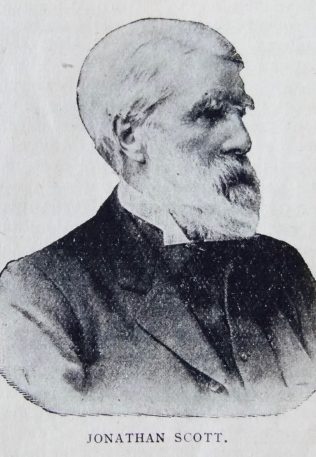 Of quite a different type was Jonathan Scott. One hardly knows exactly how to define him or where to place him in the list of outstanding workers in East Anglia, for he was many-sided. Keen, shrewd, practical, he rendered fine service to the struggling Church in the middle of last century. He was rather the ministerial man of business than the fervent evangelist. His faith must show itself in works, his theories find expression in practice, his creed translate itself into practical politics.

Not that he was unlike his brethren in the great work of saving men. He knew the art of winning men for Christ, and many under his ministry were won from darkness to light and from the power of Satan unto God. But that was not the outstanding feature of his life, the characteristic by which he is best remembered. It is rather his practical shrewdness, his unflinching courage, and his far-seeing forethought. He was essentially a great builder, but he “ builded better than he knew.” He always had an eye to business, was impatient with slipshod methods of doing the Lord’s work, was keen to see new opportunities, and shrewd in the management of official affairs.

He had been trained in the Church of England, was born into the academic air of Cambridge, was a teacher in the Church Sunday school until he was twenty-one years of age, when he was captured for Christ by the ardent evangelists of Primitive Methodism, who had a loft over a stable in the University town. Ah, that Cambridge church! It has a fine record. What men it has won for Christ! Gipsy Smith, his father and uncles, John Reed, James Pike, and many others.

Only a stable loft, but the young convert cast in his lot with the people who had won him to Christ, and never wavered in his attachment or devotion to the Church of his choice. Soon he was called into the ministry, but was strangely different from many of his companions. Tall, spare, wiry, athletic in build, no portly form, he was strikingly different from such valiant heroes as George Charlton, Robert Key, and others. He was cast in a different mould, both mentally and physically. He came from a University town, but there was nothing of the parson or the priest about him. He was exactly the opposite of this. Less conventional in dress, less formal in style than many of his comrades, but shrewd, practical, and full of common sense—the man to whom other men would turn in times of difficulty, and find in him a shrewd counsellor and ready friend.

He was a born leader of men, and yet with idiosyncrasies that sometimes made his leadership difficult to follow. He would frequently run faster than his men, and so find himself alone. He saw quickly, and wondered why others were so dense that they could not see as he saw. He reached his conclusions by intuition rather than argument, and was not always patient with the slow process of the logical mind. And then his words were not always coated with sugar, his ready wit not always expressed in delicate, diplomatic terms. He could be as caustic as soda, as withering as lightning, and yet withal as kind and gentle as a little child. He was a man who gripped his friends with hoops of steel, but whose lash was feared by those who knew him not.

Few men in East Anglia rendered finer help than Jonathan Scott. Any man in trouble – especially any ministerial brother – was sure to find in him his helper and probably his saviour. He would not spare to lay bare the wound. He would strip a man of all false and flimsy excuses until the delinquent would cry “What a fool I have been,” and then with purse and pen and influence and effort he would work like a Trojan to save the man from himself or from the consequences of some error or folly. It may be written in the “book of remembrance,” but it is not written in any earthly ledger what help he has rendered or what good he has done in that way.

When a certain man went astray and sacrificed his great gifts and powerful position in the ministry of our Church, many pitied, but Jonathan Scott toiled night and day at home and abroad “if by any means he could save him.”

It was the District Meeting. One probationer was there for his final examination. A man of brilliant gifts, and eloquent speech; one who later on in life rendered splendid service to our Church, but he had travelled five years on probation, and now the fifth examination had come. It was the time when the examination took place at the District Meeting, and the probationers filled up their papers before and during its sitting, and the examiners adjudicated on the papers there and then. Jonathan Scott was one of the examiners. From the school-room where the examination took place, the examiners came to the ministers fireside to examine the papers and award their marks. The examination was not an easy one, and one of the examiners was somewhat hard and rigid. But a little lad sitting in the corner heard Mr. Scott say to the station minister: “If this man is left to my colleague he will fail. I must save him at all costs,” and save him he did. Probably the probationer never knew, and it may be never came into close fellowship with his friend, but the man whom he feared most was the man who saved him from being “plucked” in that examination.

It was characteristic. His left hand never knew what his right hand was doing. His exterior never revealed the throbbing heart of sympathy within. Apparently cold, cynical and aloof, he would be planning some kindly deed or seeking to render some valuable help. He never wore his heart on his sleeve, but the heart was there.

And in the rough and turbulent service of early Primitive Methodism, such gifts as his were of great value. Where others quailed, Jonathan Scott would stand firm. What bantering scorn he would pour on difficult officials or village tyrants and oppressors. How bravely he would stand by the timid and the threatened, and fill them with courage by his own light-hearted contempt of those who opposed the cause. His banter would kill when blows were ineffective. His sarcasm won when argument was useless.

Sometimes he would shock his more fastidious brethren by letting his gift of wit and fun run loose. It is still told in certain quarters how on one occasion when on a missionary round in a district where rabbits were plentiful, but other kinds of meat were scarce, that he was regaled day by day with rabbit for dinner and rabbit for supper until he longed for some variety in his fare and when asked to return thanks he coolly said:

The story may be apocryphal, but it is likely to be true. It was perfectly natural to him. His exuberant fun would burst forth in unexpected ways and his eye twinkle merrily at the surprise of his friends.

But what a wide outlook he had. In the early days Africa captured his imagination, and urgently did he plead its claims and contribute to its funds, and when his health compelled him to retire early from active service, he gave himself without stint to manifold social and Christian work. His long connection with the Norwich School Board as Chief Attendance Officer, gave him abundant opportunities of exercising his unique gifts for the good of others. His racy humour and ready wit helped him in many a case of difficulty. What a friend he was to the truant lads, the first offenders! He found a congenial task in working for the “Discharged Prisoners Aid Society,” and many a man has been saved from “lapsing” into old ways and habits by his counsel, advice and help.

But his great work in later years was to found the Society which for some time worshipped in the Dutch Church, St. Andrew’s Hall, and subsequently removed to Thorpe Hamlet, where the present magnificent “Scott Memorial Church” is erected, free from debt, and in which a vigorous Church is carrying on the best traditions of Primitive Methodism in the city. It was his keen-sightedness that made the present position possible. He laboured and others have entered into his labours and effectively carry them on.

Jonathan was born on 5 March 1823 at Cambridge, Cambridgeshire, to parents James and Elizabeth. He was baptised on 22 March 1823 at an Independent Chapel in Cambridge. James was a printer.

Before entering the ministry Jonathan trained as a tailor.

Jonathan married Frances Page (1823-1901) in the summer of 1869 at Norwich. Census returns identify one child.