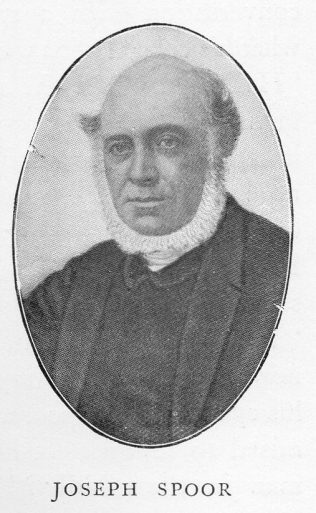 Joseph was born on 2 June 1813 at Whickham, the first child of William Spoor and Catherine Dunn. Whickham lies on the banks of the Tyne some 4 miles west of Newcastle.

William was a keelman on the river. Joseph had a limited education at a national school near Whickham and was then sent out to work aged 11, following his father on to the river. His sister wrote that although at home his behaviour was invariably decorous and kind, away from home he fell into bad habits of drinking, gambling and fighting. Working on the river was a dangerous occupation and he often had to use his swimming skills. Even so on one occasion he had to be pulled out of the water unconscious and close to death.

Joseph was converted through the preaching of Rev Hodgson Casson, an eccentric Wesleyan preacher who used unusual methods to gather a crowd to preach to. At the age of 14, Joseph, his sister, Jane, and Thomas Jobling became Wesleyans. This did not go down well with his parents who considered themselves decent ‘Church people’. Joseph and Thomas were ‘lively’ young men and did not meet with the universal approval of the established Wesleyan congregation. Joseph withdrew from the Wesleyans and joined the Primitive Methodists. The simplicity of the preachers, the utter absence of priestly airs, but the presence of real saintliness in their appearance, struck him powerfully.

Joseph’s name first appeared on the plan in December 1830 as an exhorter. His early efforts were described as rough and ready. In 1832, Rev John Coulson moved from Newcastle to Hexham. He persuaded the Hexham Circuit to use Joseph as a hired local preacher to mission in the area between Morpeth and Rothbury. This proved to be a very difficult task and Joseph was very tempted to give up. He stuck to his task but was later recalled to Hexham. In 1833, he was sent to Brompton, where the mission proved to be more successful.

Joseph became an Itinerant Minister in 1835, initially being posted to Darlington. During this posting, he was very effective establishing revivals at Southside and Cockfield, near Bishop Auckland. (See the story of John Denham – Local Preacher, who became a Primitive Methodist at that time) For much of his time in Darlington, he was supported by his sister Jane, who was employed as a hired local preacher. Unfortunately her health suffered and she had to withdraw back to Newcastle.

On another occasion Spoor and his colleague W Fulton were dragged before the magistrates by an officious policeman for a service they conducted in Ripon Market-place. It seemed likely that they would be sent to prison until a prominent citizen came to court and put a new face on the matter. A long and able letter appeared in the local newspaper insisting on the right to conduct worship in the open air and criticising the policeman and magistrates. The letter writer was Dr Longley, the then Bishop of Ripon, and afterwards Archbishop of Canterbury.

Illness caused Joseph to withdraw from the ministry for about 3 years in the early 1840’s. After his recovery, he re-established himself in Newcastle. In 1853 he was appointed the Superintendent at Sunderland.

Joseph died on 9 September 1869 in Stockton. His obituary relates how the funeral procession proceeded from Stockton to Middlesbrough where he was buried, with many joining the procession from all over the North East of England.

J Petty, The History of the Primitive Methodist Connexion, 1880, p387