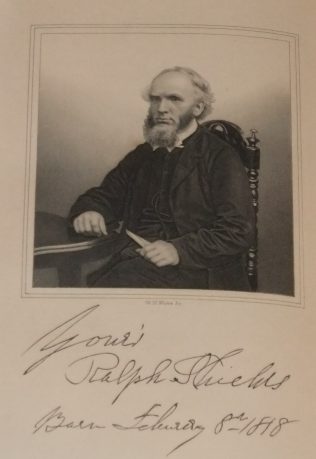 Ralph was born on 8 February 1818 at Cockfield, Co Durham. His parents were very poor and Ralph was sent to work in the coal mine at the age of 9. He worked as a miner until he was 18.

Ralph was converted during a revival at St Helen, Auckland under the ministry of Joseph Spoor. Following conversion, he joined the PM Society and learned to read and write. After two years membership, Ralph went on the plan and two years later entered the itinerant ministry.

Ralph’s obituary records that he was strong, hearty, healthy, prayerful, hopeful, companiable, industrious, read much, studied hard, sometimes preached rather long, anxious to discharge his duties and sustain his responsibilities acceptably and successfully; thoroughly upright, resolved by divine grace to glorify God and save men; and delighting himself in the Lord, obtained the desire of his heart.

Ralph spent three years as Secretary of the District Committee.