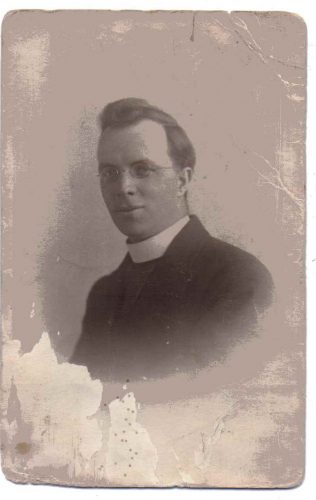 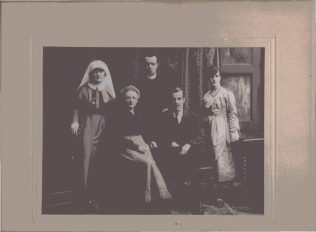 This is a picture taken of Richard Shepherd taken with his parents Sarah Jane (Jennie or Ginnie) James Shepherd (Jimmie) sister Rosina Annie Shepherd (Annie) in the nurse uniform, sister Prudence Nellie, standing. This picture was given to Polly and Herbert Deakin of 193 Church Road, Stockingford, Nuneaton, date unkown but now thought to be around 1920 as Richard entered the ministery in 1919.

It has hung on my gran and grandad’s wall for over 60 years (I am 61 and always remember it) My aunt age 96 could remember all of there christian names but not the surnames. Positively identified in October 2014, by Peggy Miller nee Wardle of Pelsall and Iris Sharrot, nee Clarke both relatives of Richard or Dick as he was more affectionately known.

Also shown is a portrait of Richard.

Richard was born in 1894 at Pelsall, Staffordshire, to parents James and Sarah. James was a coal miner. The 1911 census also describes Richard as working underground as a motor driver.

Leary identifies his stations as follows.

His obituary can be found in the Methodist Minutes of Conference 1966 p187. It records that owing to his wife’s poor health he retired early in 1958, remaining in the Leintwardine Circuit and serving it faithfully in the pulpits up to the time of his death. He was a faithful pastor and evangelistic in his preaching. He took a keen interest in young people and served as District Sunday School Scripture examination secretary while in Chesterfield. In his latter circuits, Richard was deeply interested in the “Youth for Christ” movement, arranging many evangelistic services.

A brief family history search identifies that Richard married Emma Jane Beatrice Wootton (1897-1963) in the summer of 1923 in the Cannock Registration District.