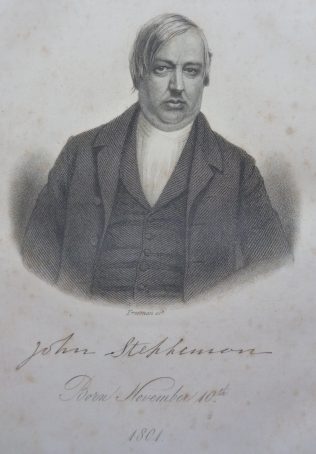 Born a Wesleyan Methodist, it was while he was serving as an apprentice in Fillingham that the Primitive Methodists visited the village. There he joined them in 1823 ‘Having obtained the pearl of great price, he soon became anxious to be the means of imparting it to others.’ (1874 PM magazine: 238). Initially he became an ‘exhorter’ and journeyed for many miles to fulfil his duties.

Despite the hardship and poverty faced by many PM ministers at that time, he began his ministry in 1828 in Grimsby.

Extracts from his diaries bear testament to his zeal as an evangelist. From an extract in 1842, ‘..upon the whole we had a good day…. Since then a few souls have been converted there, and among these, there is an old man, in his 89th year. A brand plucked from the burning! May they go on and prosper’. And from his journal in 1843: ‘On April 12th, I held a penitent meeting at Ilkeston, and gave an address on faith and a present salvation. Many persons were present; and after we had had a hard struggle with the powers of darkness victory was obtained, four or five souls were brought into the liberty of the children of God.’

A ‘keen and penetrating mind’, John Stephenson was remembered as ‘natural, outspoken and witty; in public meetings often droll in the extreme, but so pithy and pointed as to make the people laugh and cry almost in one breath’. He strove to be true to himself and in spite of struggles with his mental health, his ministry was characterized by growth and faithfulness to the Gospel.