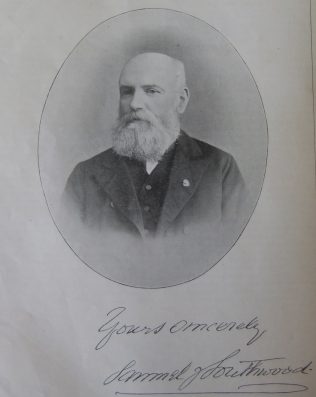 Samuel was born on 10 August 1837 at London to parents Samuel and Harriet. Samuel was baptised on 14 October 1837 at Commercial Rd Independent Chapel, London. Samuel senior was an accountant.

From the age of 15, Samuel took an active and prominent part in the work of temperance. In association with several other youths, he formed a Temperance Society in a back street in East London.

Samuel entered into business as a clothier’s shopman in Gravesend. There he became engaged in various kinds of Christian work; teaching in the ragged-school, preaching in tramp’s lodging houses and visiting the sick and poor.

Samuel’s obituary records that he was an unassuming, plodding, unselfish worker, possessing a keen sense of justice, duty, truth and righteousness, a forcible and convincing preacher and teacher, who knew how to present great and important truths in simple, suitable, encouraging, inspiring and unmistakable utterances.

Samuel was an active ‘Good Templar’. In 1888 he was elected Grand Chaplain of England.

Samuel wrote the ‘Biographical Temperance Dictionary’, published over ten years in volumes of the Temperance Worker.