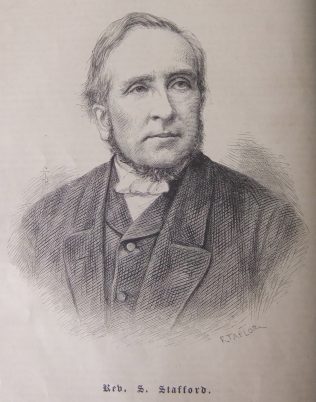 Samuel was born on 11 November 1827 at Woodley, Cheshire to parents William and Jane. Samuel was the youngest of four brothers.

Samuel was converted shortly after he and number of friends were caught in petty vandalism on their way home from a Sunday morning bible class and challenged about their behaviour. With several others, Samuel formed a Juvenile Missionary and Revival Band. He developed into a class leader, local preacher and then into the itinerant ministry.

Samuel’s obituary records that he was a man of quiet unassuming disposition. He betrayed no servility to those whose worldly circumstances were superior to his own, nor, on the other hand, did he display undue assumptions towards any with whom he had to associate in Christian life and work.

As a pastor, he lived among his people, he visited them regularly and frequently gave counsel and admonition where needed, and manifested practical sympathy in cases of distress; and to the credit of his catholic spirit, we may state that his generous aid was not confined to members of his own community.

In his pulpit ministrations there was no affection; his sermons, however, were thoughtful, calculated to instruct the mind, to affect the heart, and to reform the life; and so we find him successful in the conversion of sinners in all the circuits in which he travelled.

Samuel married Ann Higginbotham in late 1852 in the Stockport registration district. Samuel was a widower in 1856. Ann died circa 1853/4.

H B Kendall, Origin and History of the PM Church, vol 2, p50