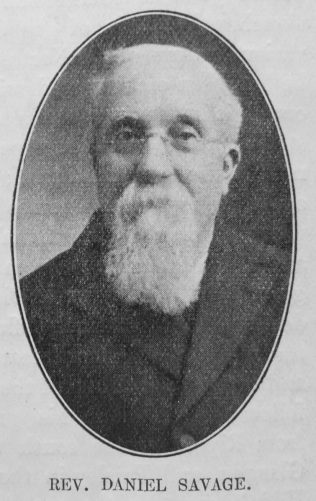 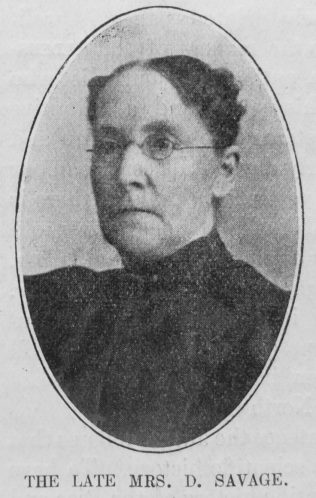 REV. DANIEL SAVAGE is the oldest Primitive Methodist minister in America. There are, probably, still living a few of the old people in Cooper’s Gardens Chapel, London, who may remember the towering and portly form of our brother when he was a young man. He was converted to God in the old sanctuary above named when a mere boy; and subsequently became Sabbath School teacher and local preacher. He was always welcomed by those to whom he preached, and many were the seals to his ministry, even in those early days.

He was married to Miss Eliza Johnson, a member of the same church; and some forty years ago, or more, went to reside in the United States. They at first settled at Brooklyn, N.Y., but in 1870 he received a call to the regular ministry, amongst the Primitive Methodists in Pennsylvania. He believed the call to be of God, and accepted, and at once entered upon a long career of usefulness.

He served the church of his choice with great acceptance, and is beloved by thousands of his hearers on the many stations on which he has laboured.

It was with great regret to him, and also to his brethren in the ministry, that at the Annual Conference of 1907 he was compelled to ask for superannuation. This was made necessary, partly through the failing health of his devoted wife who, while they were serving the Girardville Church, in the Schuylkill District, entirely collapsed. In May, 1907, they went to reside at Plymouth, Luz. Co., Pa., so as to be near one of their daughters, and here our good sister lingered and suffered, but was sweetly resigned to the will of her Lord. On January 18th, 1908, she fell asleep in Jesus, and was laid to rest a few days afterwards, in the Odd Fellows’ Cemetery, Samaqua, Pa., there to await the resurrection of the just.

This was, of course, the heaviest cross our brother Savage has ever had to bear. Surely earth is poorer, and heaven is proportionately richer for her translation. It is not too much to say of her, that whatever of success her husband was credited with, in the various reports sent to the annual Conferences from time to time, will be largely put down to her account in God’s book. We deeply feel her loss, and our sympathies go out to our dear brother in his loneliness and sorrow. They lived together in true conjugal affection for fifty-three years, and it is no wonder that the bereaved one so often “longs for the touch of a vanished hand, and the sound of a voice that is still.” He is looking forward, however, and joyfully anticipating a blessed reunion in the glory land.

Brother Savage has filled the highest offices in the gift of his brethren. He has been elected twice as President of his Conference, and at the last General Conference, held at Shenandoah, Pa., October, 1905, his brethren honoured him and themselves by placing him at the head of that body by an almost unanimous vote. This office he fills with dignity and grace; he has faithfully fulfilled its duties, notwithstanding his overwhelming sorrow, and has maintained the confidence and esteem of his brethren. Our prayer is that his declining days may be bright with the sunshine of God’s love, and that “at evening time it may be light.”

Daniel was born on 16 August 1835 at Shoreditch, Middlesex, to parents Daniel Savage, a shoemaker, and Lydia Elizabeth Briggs.

He married Maria Margaret Johnson (1836-1908) on 3 July 1853 at St James the Less, Bethnal Green, Tower hamlets, London. At the time of his marriage, Daniel was a shoemaker. Census returns identify ten children.