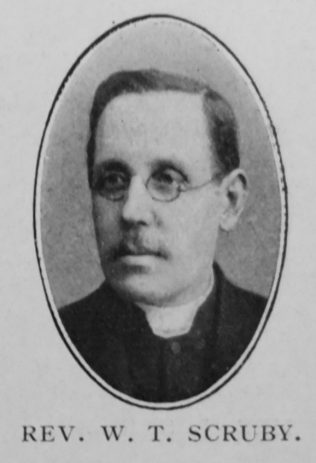 Transcription of obituary published in the Primitive Methodist Magazine by J.L.

The Rev. W. J. T. Scruby, after 27 years of fruitful work in the ministry of our Church, died at Hinckley on June 4th, 1912, and was called to the higher service in the fulness of his life and energy. He was born at Barking, in Essex, in 1859, but removed in early life to Hull, where, in connection with Clowes Chapel, he graduated as scholar, teacher, local preacher and minister.

The circuits he travelled in were Walthamstow, Chichester, Pewsley, Newbury, Scunthorpe, Peterborough, Luton, Swindon, Windsor, and one year at Hinckley. From these deputations and members were sent to his funeral, as witnesses of a fresh remembrance of and high regard for his ministry.

Whilst never muscular or robust, yet there had been given him a considerable endowment of physical energy and sustained healthfulness, and these he used without self-consideration in the service of his Church, never admitting flesh and blood into his counsels when discussing his duty or his task. He had an energetic mind and was distinctively a thinker. He courageously faced the problems not only of theology, but of life, and hence his sermons were rich in insight and guidance. His own faith had not come to him easily. By the law and type of his mind he gave no assents without insight, and his convictions were consequently held with intelligence and intensity, his own intellectual warfare making him a helpful counsellor to those in doubt.

It was his greatest joy to meet young men in their storm and stress period and direct their thought. He will be remembered by his circuits for his unstinted devotion to their progress. He was distinctively a circuit minister. A capable politician, and prominently employed by the National Liberal Association; a bold and well-instructed Free Churchman, always ready with the word of defence or advocacy, and possessed of passionate social sympathies born of his own antecedents, yet the concentrations of his life were on his pulpits and his circuits. To these he gave his best endeavours.

He had no ambitions for Connexional status, but he had circuit enthusiasms. He loved his work, and the zest and glow of it were in his heart. He knew no alternative to preaching, and he had the fine passions of a preacher. His services were not appointments they were opportunities.

His brethren of the ministry will remember him as the manliest of men, human-hearted, always responsive and willing in their service, an interesting conversationalist, and a brother with whom one had no reserves. His religious life was not of the emotional type. He did not readily deliver up the secrets of his wrestlings and communings, and he had his own closed chamber; but in his preaching, prayers, and conversations there was an unction, a touch, a note of the skies. He was no cold intellectualist. He had seen other visions and breathed on the heights, hence his heart had its own fulness.

He was buried on June 8th at Hinckley. The Revs. S.A. Barron, R.W. Keightley, J. Keightley, G. Chun, J. Lindley, F.W. Beal, J.T. Bennington, E. Morris, and Mark Knowlson took part in the funeral service, and the Rev. Jas. Lockhart gave the address. The General Committee, District Commitees, and some of the circuits he had travelled in sent representatives, and in many ways regard and affection were expressed for his memory and sympathy with Mrs. Scruby and his children.

William was born in 1859 at Barking, Essex, to parents William Scruby, an unemployed shipwright & grocer (1881), and Alice Wait. he was baptised on 5 October 1859 at St. Margaret, Barking.

The 1881 census return records William as a mast and block maker.