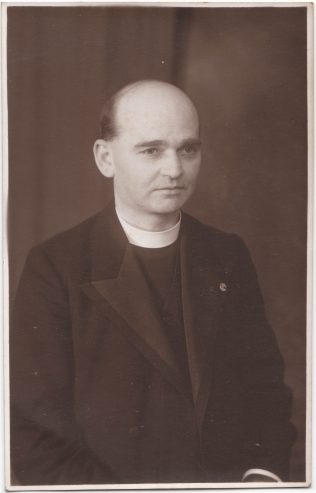 Born at Great Bircham, Norfolk, in 1889. In his early days he was eager to acquire knowledge, and this interest was greatly stimulated by his association with the Methodist Church. He overcame many difficulties in his youth to prepare himself for the call to the Ministry, and was eventually trained at Hartley College.

His first circuit was at Norwich in 1915. He was keenly interested in horticulture, and often acted as a judge. A man of many parts and an enthusiastic student, he never lost contact with the common needs of his people, nor failed to give good judgement on the current affairs of the day.

His preaching was the outcome of careful preparation and much study. His wide reading brought demands for him to lecture on many subjects. The business side of the Church received his careful attention as well as did the pastoral work. People in need received his constant service.

As a Superintendent he was wise in counsel, kindly and brotherly in his dealings with his colleagues.

He had a sense of humour and a wit that gave cheer and hope, even in a crisis. His kindly nature won the affection of all who knew him intimately. All his interests in the work of the Church he loved were retained to the end.

His radiant Christian personality will be greatly missed by the many who knew him.

Seemingly in good health, he was suddenly taken ill upon reaching home from a meeting, and passed away on 24th January 1950, in his sixtieth year and the thirty-fifth of his ministry.

Charles was born in 1889 at Great Bircham, Norfolk. His father, John, was a shoemaker.

The 1911 census records Charles as a hired local preacher.

He married Mary Leather in the spring of 1919 at Wakefield, Yorkshire.