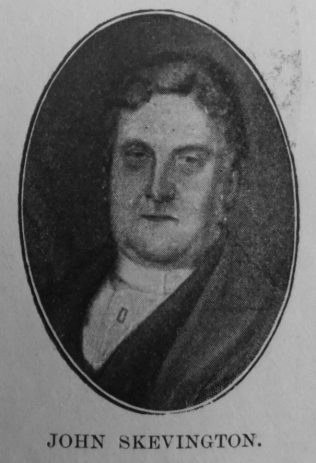 A transcription of journal extracts published in the Primitive Methodist Magazine is attached. This is related to John’s time at Sheffield.

Kendall records that he began to preach whilst in his teens, being known as “the boy preacher”. John suffered with lameness which rendered the work of the regular ministry difficult, if not impossible. He was severed from the connexion in 1836 as a result of the troubles of Dead lane, where John was the treasurer. The following year the People’s Charter was formulated and adopted and John became a convinced Chartist. When the first Chartist national Convention was held in London in 1839, the Loughborough Chartists sent John to represent them. Kendall records that John was considered a moderate in the sense that he did not advocate Physical Force as some in the Chartist movement. He was on the side of the advocates of Moral Force.

Kendall reports that John sought reinstatement into the connexion in 1837 and hints that Hugh Bourne effectively blocked the application due to John’s radical views.

John was born in 1801 to parents John and Mary. He was baptised on 29 November 1801 at Basford, Nottingham.