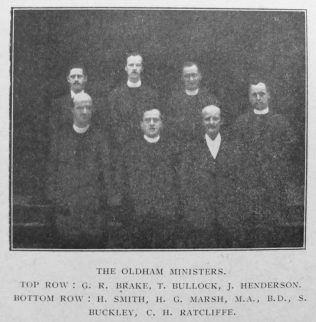 HERBERT SMITH: born at Talke, Stoke-on-Trent, in 1884. He was trained at Hartley College and entered the Primitive Methodist Ministry in 1910. On leaving college he was President’s Assistant to the Rev. S.S. Henshaw and subsequently travelled in Millom, Gloucester, Nantwich, Abertillery, Oldham, Northwich Runcorn, Darwen, Colne, Bramley, Huddersfield, and Batley.

His organising and administrative abilities were displayed to advantage when he was secretary for the National Sunday School Union in Birmingham and later when he was secretary of the Local Preachers Committee in the North Lancashire District. As a preacher he was careful in exegesis, pungent in delivery, and ever concerned to apply the Gospel to the needs of men and social problems.

He was a man of integrity and a great lover of justice; he never hesitated to champion unpopular causes if he felt they were right. Possessed of a shrewd wit and a deep understanding of human nature, he was a redoubtable foe of all that savoured of pomposity or pretence. But above all, he will be remembered as a faithful pastor with a particular concern for the aged and a great love for little children, who always delighted in his company. He gave to all who knew him an impression of strength and self-mastery, and both these qualities sprang from his awareness of God’s presence and his dedication to the divine will.

After his retirement in 1954 physical weakness deprived him of the joy of preaching, but he never complained and faced his infirmity with grace and fortitude. He died on 17 January 1961, in the seventy-seventh year of his age and in the fifty-first of his ministry.

The 1901 census return records Herbert working as an iron turner.

The 1939 Register records Herbert as a widower. I have not been able to identify his first wife in online records.