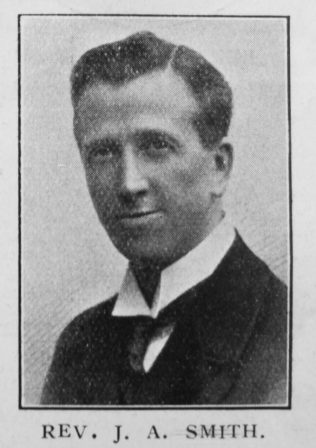 JAMES ARTHUR SMITH born in 1886 at Barwell in Leicestershire. He began his education at the village school, was trained for the Ministry at Hartley College and never finished his education for his alert mind was ever observant and enquiring right to the end of his days. His call to the Ministry, his one aim in life, came in his early teens and he became a Local Preacher at the age of seventeen.

He was a profound thinker, he loved philosophy, and was a passionate advocate for his Lord and to this end he dedicated the richness of his deep well-trained bass voice. Wherever he ministered his sure sincerity was recognized and evidenced by the building up of the Church and the trail of lasting friendships that he left behind.

Upon retirement he went to live at Cromer, where from the sidelines, by his friendliness, prayer, and strong support he contributed richly to the services of worship and the encouragement of the Preachers. His retired years were by no means his least effective. Many remain who give thanks for this man of God and count themselves to have been blessed to have his friendship. He himself attributed all his virtues to his wife.

He died on 3 October 1967 in the eighty-second year of his age and the fifty-third of his ministry.

The 1901 census return records James working as a shoe clicker.

He married Florence Bamforth (1885-1982) in the summer of 1916 in the Bradford Registration District, Yorkshire.