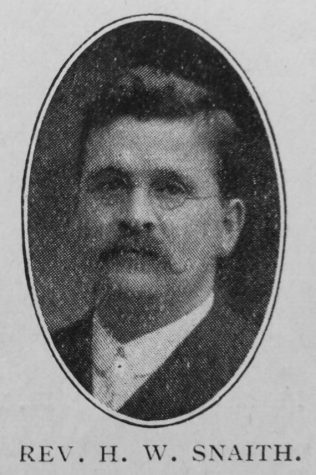 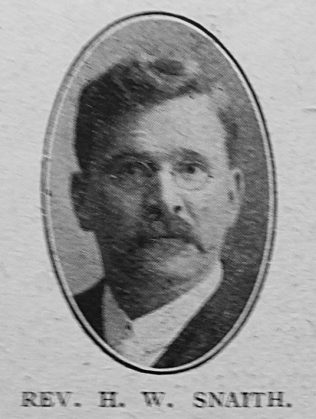 Transcription of obituary published in the Primitive Methodist Magazine by S.K.S.

There are some services we render at great cost to ourselves which become a fragrant and grateful memory. I went last year to the Leintwardine Circuit, at great personal inconvenience, because my old friend, the late Rev. Herbert W. Snaith, was superintendent minister and was ill. Now that his beautiful spirit has passed on to the higher life, I am glad I went. Though he had suffered from a mysterious affliction for nearly twelve years he was just the same bright, brave Christian gentleman I had always known.

Herbert and I were next-door neighbours for two years in Hartley College. We often tugged together at Greek declensions and had a few vigorous tussles on the football field. He was a good athlete and a manly sport. None of us suspected, nor did he, any bodily weakness. He was genuinely proud to become a minister of Jesus Christ. He regarded it as a high vocation. The motive of his preaching was a grateful joy and the influence of his ministry a permanent enrichment. Temperamentally he was diffident and was not always quite correct in his self-judgment. He never flattered himself and was always out to do more.

Herbert was a child of the manse, born at Tow Law, Co. Durham, and son of the late Rev. John Snaith. He began his ministry on the Glasgow I. Circuit and served on the following: Haywards Heath, Helmsley, Cwm (twice), Reading, Eston, Middlesbrough, Scotter, Lydbrook, and Leintwardine. On each of these circuits he gave of his best and multitudes were spiritually exalted by his faithful ministry.

During his term on the Middlesbrough Circuit the erection of the new church at North Ormsby—of which he had charge—was a fine piece of work and will remain as a memorial to him. I well remember the day it was opened, and how glad he was to have an old friend share in the triumph. In fact, that was his way, to keep in the background what he did, and let others find it.

What a price he paid in doing his work! For twelve long years he stood up bravely against a mysterious affliction. Everything was done that medical skill could devise. He devoutly hoped the “one year’s rest” would restore him, and so allow a few more years here with his loved ones, and the work of his life. But it was not to be.

In the prime of his manhood he was “called higher” on February 1st, 1926. His mortal remains were laid to rest at Leintwardine on February 5th. A large number of ministers and laymen in the district, as well as his own people, paid their farewell tribute to a faithful minister of Jesus Christ. The service was conducted by the Revs. J.M. and F.M. Ridge, and a tender address given by an old friend, the Rev. E.E. Fisher. Deep sympathy was expressed by a large circle of friends for the widow and daughter in their sad bereavement. Now he has left us his works still follow.

“Now the labourer’s task is o’er.
Now the battle-day is past,
Now upon the farther shore
Lands the voyager at last.”

Herbert was born in 1874 at Tow Law, Co. Durham to parents John Snaith, a PM minister, and Ann Tiffin.

The 1901 census return records Herbert working as a factory clerk.