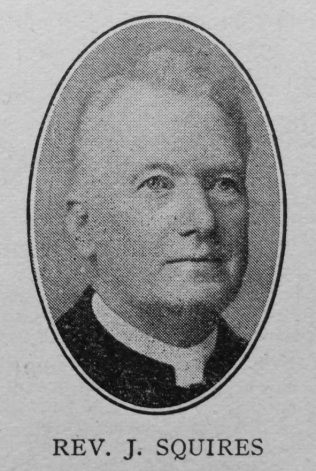 Transcription of obituary published in the Primitive Methodist Magazine by T.L.P.

The death of Rev. Joseph Squires on March 19th, 1929, was so sudden that it came as a shock to his family and to the town of Slough, where he had, since his superannuation, made for himself a respected place in public life, Medical opinion had warned his friends that his heart affection might have an unexpected termination. He was acutely ill for only a few hours. He was a native of Dunstable; his father being a farmer, and his family Primitive Methodists. When fifteen he began to preach and won fame as a “boy preacher.” In his teens he went as H.L.P. to the Channel Islands. From there he went to Sunderland College.

For forty-three years he spent his strength in loving, faithful toil in the active ministry. His Circuits were strengthened and built up by his earnest evangelism, his diligent and affectionate pastoral care. He loved his flock, and his sincere and unprofessional concern for their best interests won for him genuine appreciation and admiration. The Circuits he served indicate the tact and adaptation he was called to exercise: Winchester, Swindon, Newbury, Bournemouth, Newton and Hyde (where J.G. Bowran was his junior colleague), Newport (Mon.), Grimsby, Louth, Gainsborough, Gillingham (Kent), Redhill, Southampton, Gravesend, Holloway, and Slough.

Upon his retirement his Sundays were taken up with preaching engagements. All the Free Churches welcomed him, his own denomination being served by preference. He was enthroned in a pulpit. A rhetorical style, which was in vogue in his youth, with profuseness of language, adorned his discourses, which were delivered with fiery eloquence. He clung to the fundamentals, and had a rich Christian experience. The Methodist theology unrevised was sufficient for his thought and satisfaction. His reading was largely in Methodist literature, and biography, though he knew the claims of modern science, and was versed in recent philosophy. An attractive man, with ruddy, clean-shaven face, corpulent, but agile in his movements, his manner was hearty, free, jovial. In his hand-grip there was warmth and geniality, and his beaming smile made stiff people relax.

His leisure was turned into public service. He became a Guardian, and was the friend and adviser of the inmates of the Inmary. From them he earned the encomium: “Blessed are the cheer-makers, for they shall be called the sons of the morning.” As School Manager he had the confidence of the public, the teachers, and the children, who loved his talks to them, and voluntarily subscribed their pence to send a wreath to his funeral. At his death he was the Chairman of the Education Committee. He gave much service to the Free Church Council, and was an enthusiastic Temperance stalwart, one of his last tasks was to fight alone the publicans and brewers in the Brewster Sessions.

At his funeral all the public bodies of the town were represented. This was held at an inconvenient time in Ledgers Road Church, but there was a large attendance. Mrs. Squires, who has been a faithful helpmeet and done a great work in the Circuits they have travelled, survives with impaired heath to mourn a great loss, but she is comforted by a loyal son, a lay preacher, and School Superintendent, and a daughter whose husband is preacher and Circuit Steward. By all the friends in the Slough Circuit Mrs. Squires is held in affectionate regard, and their prayer is that the sunset glow may be upon the evening of her long and useful life.

Joseph was born in 1855 at Dunstable, Bedfordshire, to parents Daniel, who worked the land, and Ann.

Before entering the ministry Joseph worked as an agricultural labourer (1871).

He married Elizabeth Williams (1852-1938) in the summer of 1884 at Southampton, Hampshire. Census returns identify two children.