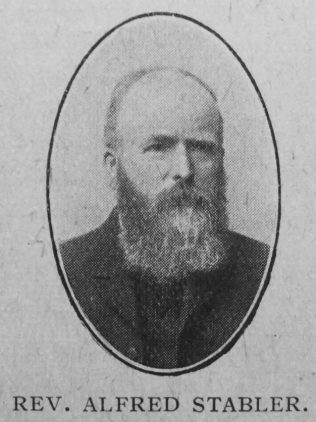 Alfred Stabler was born at Haxby, near York, November 19th, 1846. Little is known of his early years, but he was accustomed to say that his mother was a godly woman. In his youth he lived at Grosmont, near Whitby, becoming a local preacher in his nineteenth year. In June, 1866, the Whitby Circuit recommended him to the District Examining Committee “as a fit and proper person for our ministry.”

A year later he was stationed by Conference to Horncastle. The next year he went to Ripley, thence to Ilkeston, finishing his probation at Sleaford. As it began, so his ministry continued on rural circuits until forty years had been completed. Most of his circuits were in East Anglia, with other terms at Bedford, Cwm, Ramsor and Helmesley. Throughout all the years “he wore the white flower of a blameless life.” He was a plodding worker, careful of details, both on his circuits and in his personal life. No man could be more conscientious than he was, in many things being scrupulous to excess. Many of his circuits were wide and difficult to work but he never shirked any labour, though it involved long journeys and frequent absences from home.

When he superannuated in 1907, he and his wife settled in Leicester, where their elder son was in business, and joined in membership with Curzon Street Church. For a few years he rendered occasional service as a preacher, and to the end was very diligent in his attendance at the Sunday and week-day services. His interest in church life remained unabated. From the time he entered the ministry until his death he never missed a Quarterly Meeting.

The decease of his wife in November of last year was a terrible shock to him. On Christmas Eve he had a slight seizure, which was followed by a worse one on December 26th, and two days later he passed away. The funeral service was held on December 30th in our Curzon Street Church, and was very impressive. The Rev. J.T. Ecob, the District Committee Secretary, gave the address, and the Revs. P. Nume, G. Welbourne, W. Thompson and W. Dawson also took part. The Rev. Arthur Jubb offciated at the committal service in the Welford Road Cemetery.

Alfred was born on 19 November 1846 at Haxby, York, Yorkshire, to parents William, a tailor, and Sarah. He was baptised on 6 December 1846 at Strensall, Yorkshire.

Alfred trained as a tailor before entering the ministry (1861).

He married Emily Fenn (1841-1920) in the summer of 1874 in the Aylsham Registration District, Norfolk. Census returns and birth records identify three children.