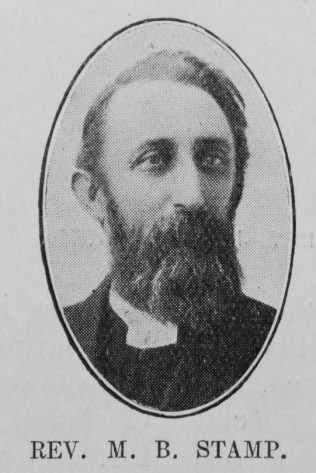 Transcription of obituary published in the Primitive Methodist Magazine by S.S.H.

Born at King’s Lynn in 1847, Matthew B. Stamp was the son of Church of England parents, who had strong prejudices against “dissent.” Deeply impressed by the death of his father when fourteen years of age, he sought and found forgiveness of sin and reconciliation to God. Under the advice and guidance of a Primitive Methodist local preacher he immediately joined our Church and began regularly to attend the class meetings and public services. He was soon actively engaged in the work of the Sunday School as a teacher. Made a local preacher shortly afterwards, his labours in the Gospel proved so acceptable and useful that in 1868 he was called to enter the ministry in the Alford Circuit.

On all the circuits on which he travelled he had considerable success. In some of them gracious revivals of religion were experienced, and many souls gathered into the Church and Kingdom of the Christ. His preaching was eminently evangelical in doctrine and evangelistic in spirit and tone. He desired the salvation of men. That was the grand object at which he aimed in all his pulpit efforts, and very often by the blessing of God he achieved it and rejoiced over the conversion of men to the cause and cross of his Master. Blest with a magnificent voice he was a powerful open-air speaker. In street and field he rang out the messages of truth and grace in clear and splendid utterance. His earnestness was overwhelming. It was contagious. People who had close communion with him caught his intense zeal. It breathed and burned in his words. Heart and brain were touched with holy fire. The passion to serve glowed and flamed within him.

He was a tremendous worker. All his energies were consumed in consecrated toils. No rest, no pause, no selfish seeking of ease or leisure. He passed from circuit to circuit and from task to task, never wearying of the work or complaining of the burden. This incessant, unsparing labour no doubt helped to hasten the end. Stricken down with a paralytic seizure at Dewsbury, after a few months his health seemed so wonderfully restored, that he went to North Bow, London, with great hopes of doing great things for God. But on the second Sunday evening of his ministry there, while preaching, he was stricken by another attack of paralysis, and two or three hours later passed into the presence of his Lord to receive the recompense of his reward.

Mr. Stamp aspired after the higher, and the highest experiences of the Christian life. Identified with the Association for the promotion of Holiness in our Churches he tried to be true to his profession. There was not the least affectation about him. His creed was embodied in character and conduct. Theory crystalised into practice. He was a genuinely godly man and held a worthy, honourable place among is brethren. He cultivated the spiritual. The spiritual illumined his conversation and shaped his career. His frank, friendly presence made his visits welcome to the homes of the people. He had a big, generous heart. His sympathy with the sad and suffering was instinctive and tender. The poor found in him a ready helper. He was a happy soul. His religion was a perpetual spring of joy to him. He kept a bright, cheerful outlook. His merry laugh was good to hear.

His business insight and ability were a valuable equipment. They fitted him to battle triumphantly with chapel difficulties and debt reduction schemes, and gave him distinction in the secretariats he was called to fill. He was favoured with a most admirable and devoted wife, who encouraged and assisted him in all his enterprises. Their home life was sweet and gracious.

Mrs. Stamp predeceased her husband by two years. The remains of both rest in the cemetery at Dewsbury, and in the heavenly land they wait the arrival of those whom they loved. ‘Their lives and labours are a blessed memory and a rich heritage of inspiration, comfort and hope to their children and friends.

Matthew was born on 10 June 1847 at Kings Lynn, Norfolk, to parents Matthew Stamp, a merchant’s clerk (1847), and Elizabeth Oakes. He was baptised on 30 July 1847 at St Margaret with St Nicholas, Kings Lynn.