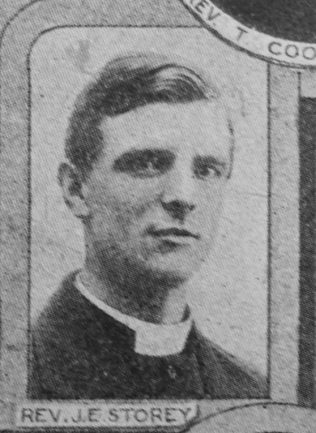 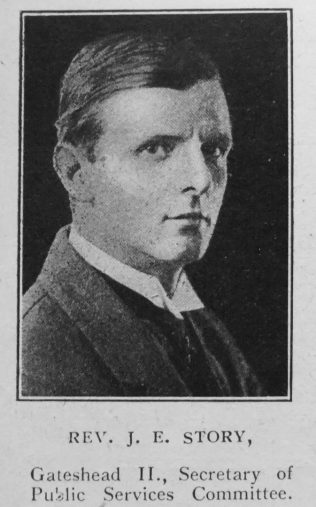 JOHN ERNEST STOREY, M.A.: born at New Silksworth, in the County of Durham, in 1890. Beginning his ministry in 1915, he served in the following towns: Grimsby, Gateshead, Liverpool, Burnopfield, Sunderland, Clitheroe, Leicester, Newcastle, and, finally, Stanley.

From his early years he had an eager, questing mind and became an omnivorous reader—often stealing time for study from the night hours. He was dominated all through his ministry by the realization that Christ had called him to it. His three years training at Hartley College gave a twofold direction to his mind and spiritual life. First, under the late Mr. Atkinson Lee his philosophic bent was encouraged and directed and gave reinforcement to his faith; second, he was attracted to the study of mysticism and was a close disciple of von Hugel. His thesis for the Liverpool M.A. was on this subject.

His pastoral work was correspondingly disciplined. His deep religious experience, fed by study of the lives of the saints and of much classical devotional literature, gave him strong human compassion. Lying beneath a certain initial impetuosity of tongue, there was in him an intense love of the hearts and needs of the folk committed to his shepherding charge. He would do anything for them and gave bountifully to them. Those whose circumstances asked much of him came to grapple their souls to him with hoops of steel. He was a great minister, a great pastor, and an outstanding preacher.

His tallness and erectness of stature and the incisiveness with which he walked had their counterpart in his moral character. Perhaps he was sometimes impatient in his judgements, finding it hard to suffer fools gladly. But he was essentially humble in heart and mind and was full of reverence for the holy. He had a great many talents to spend and he gave them utterly to the Lord he loved. He had but one ambition; it was to bring sinners to the Saviour.

He was called to higher service on 28th December 1955, in the fortieth year of his ministry and the sixty-sixth of his age.

John worked as a draper before entering the ministry (1911).

He married Frances Elizabeth Wright (b1893) in the summer of 1919 in the Chorlton Registration District, Lancashire. The 1933 Methodist Who’s who records that they had a son and daughter.