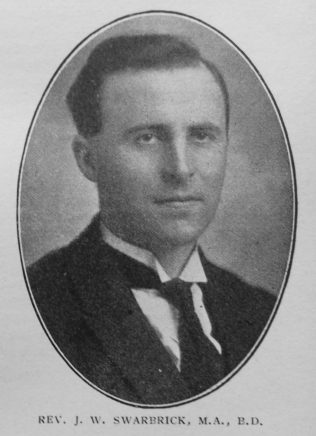 JOHN WILLIAM SWARBRICK, M.A. B.D.: born at Sterndale Moor, near Buxton, on 16th January, 1896. His family were Primitive Methodists and their influence and example made him sensitive to God’s call. Accepted as a candidate for the ministry at the age of 18, he was sent to Hartley College, Manchester. On the outbreak of the First World War he joined the Royal Army Medical Corps, transferring later to the Royal Flying Corps.

Returning to Manchester, he continued his studies at the University, obtaining the degrees of Bachelor of Divinity and Master of Arts. Ordained in 1922, he served in the Biddulph, North Shields, Tunstall and Sheffield (Peter Street and North East) circuits, ably supported by his gracious wife, Lydia Rains, whom he married at Buxton in 1925.

Taking up their appointment in the Matlock Circuit in 1938, they shared a memorable ministry that lasted nineteen years. In addition to the constant care of his people, his service to the wider community was notable. After serving as District Secretary, he was Chairman of the Derby District for eleven years, moving to Nottingham in 1957 as the first Chairman of the Nottingham and Derby District. For the next six years he drew the circuits together in common witness and service.

He was scrupulously fair to all, ministers and laymen, and circuits large and small. With kindness, patience and courage he dealt with their problems and loved them with the love of Christ. Retiring to the Nottingham (West) Circuit in 1963, he continued to preach throughout the district. By his regular attendance at his Fellowship of the Kingdom Group Meeting he constantly encouraged his brethren. John Swarbrick was a good man, quiet, kind, peaceable aad self-effacing.

He died suddenly while travelling home from a preaching appointment on Sunday, 9th December, 1973 in the seventy-eighth year of his age and the fifty-sixth year of his ministry.