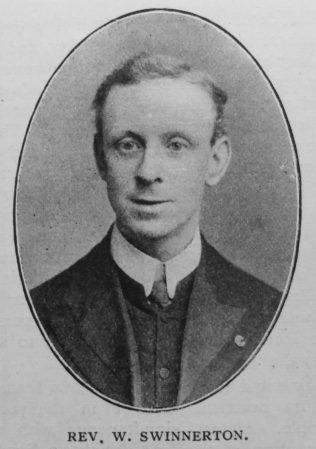 WiLLIAM SWINNERTON: born in Attercliffe, Sheffield, in 1880, was a faithful pastor and effective preacher. He moved to Bolton early in his life, and entered the minstry from the Rawtenstall circuit. Leaving Hartley College in 1905, he served in the Alford, Shrewsbury, Hereford and Radcliffe circuits, and then in the first World War as the first Primitive Methodist minister to enlist as a private soldier, he joined the Lancashire Fusiliers. Later he was an instructor at Aldershot, and was commissioned as a chaplain. He served in France with the 10th Cheshire Regiment. He was keenly interested in sport, and was sports officer for a section of the Western Front.

His later ministry took him to Sheffield Central Mission, Wirksworth, Hoyland, Barnsley (West), Horbury and Hull. He retired to Southport in 1946, and was active in the over-sight of the Crossens society for four years, and later of the Formby Congregational Church.

When he was forced by increasing years to cease from active work, his interest in the life of the church and its people was real and kindly. He died in the Promenade Hospital at Southport on Sunday, 24th September, 1972, in the ninety-third year of his age and the sixty-eighth year of his ministry.

The 1901 census return records William working as an evangelist.