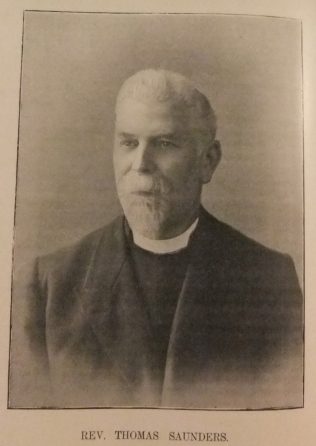 Thomas was born in 1845 at Kemble, Gloucestershire to parents John and Eliza. John was a blacksmith. When the PM missionaries first visited Kemble and adjacent villages, they were roughly handled by many and found no support from the land owning magnates. John had been a worshipper and chorister at the Anglican Church. He defended the missionaries and later joined with them in fellowship.

Thomas was converted through his brother during a revival period following a camp meeting. Thomas was soon a local preacher on the Cirencester circuit. The circuit at that time covered an area forty miles by twenty.

As a preacher he largely dealt with the Scriptures by exposition, but occasionally preached on a topical subject. The conversion of sinners, the erection of chapels and the care of the churches under him were his principle concerns.

Thomas married Ann Compton (b1843) in the summer of 1872 at Kemble, Gloucestershire. Census returns identify four of five children.