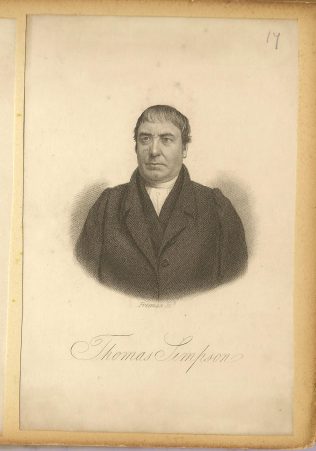 Thomas was born in Scotland in November 1785. At the age of 15, Thomas moved to Carlisle and learned the business of distilling and refining spirits of turpentine. He moved to Hull where he married. Thomas and  his wife were not religiously inclined until one day their five year old daughter said, ‘Mother, I am sure God will never love my father because he says naughty words.’ This struck a chord and Thomas and his wife joined with the Wesleyans. For some time he was in the same class as John Oxtoby. Four years later during the Clowes led revival in Hull, Thomas joined with the Primitive Methodists. He became a local preacher for three years before becoming a travelling preacher.

Dent records. “ There have been many grand revivals in Weardale since Mr. Sanderson travelled there; the most remarkable of which, perhaps, occurred under the superintendency of Thomas Simpson in 1836, and more recently when the Rev. H. Philips was the superintendent. At both those times many hundreds were converted, so that a large proportion of the inhabitants became connected with the two bodies of Methodists.”