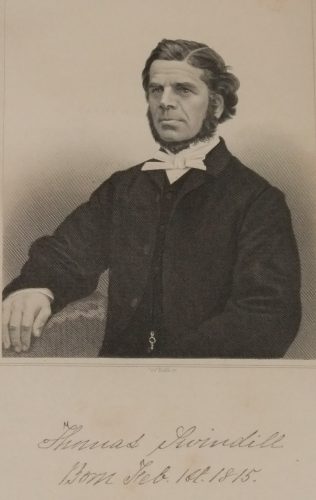 Patterson writes in relation to the Tabernacle chapel at Yarmouth. “The great increase of converts during the ministry of the Revs. J. Smith and T. Swindell resulted in the taking down of the first, and the building of the second more spacious Tabernacle.”

In the April number of the “Primitive Methodist Magazine” for 1850 appears a communication from the late Thomas Swindell, who was stationed at Yarmouth at the time. It is headed , “PREPARATORY BEGGINGS FOR AN ENLARGEMENT OF OUR YARMOUTH  CHAPEL,” and commences, ” Dear Editor, last July a public meeting was convened in our chapel at Yarmouth, partly for the purpose of laying before the hearers the necessity for enlarging the sanctuary in which they were assembled. With the project they acquiesced ; some donations were then promised . . . a committee was organised. . . . Anxious to raise the necessary funds, the committee established monthly meetings, to receive instalments and contributions, and to inquire into the success of the canvassers for aid who had been planned to visit every district of the town.” January I5th was chosen as the day when all outstanding sums should be received. Two hundred persons sat down to a tea, the “Primitive” way always of inaugurating a move or celebrating its consummation. ” A public meeting was held, which, for unity of feeling and purpose, surpassed any that I ever witnessed. Each seemed to vie with his neighbour in liberality, and hence notes, gold, silver, copper, and valuable books were poured into the Lord’s treasury.”

Work commenced in April 1850 and re-opening services were held in September 1850.

His obituary records that he was an excellent administrator. As a preacher he made no attempt at intellectual or rhetorical display, neither were his ministrations characteristically those exhibitions of great emotion which so distinguish some preachers. Nevertheless his preaching was of high order.

A H Patterson, From hayloft to temple. The story of Primitive Methodism in Yarmouth: biographical, reminiscent, chronological, etc.

A Champion of East Anglia (382 KB Adobe Acrobat document, opens in a new window)
Transcription of an article in the Christian Messenger 1915