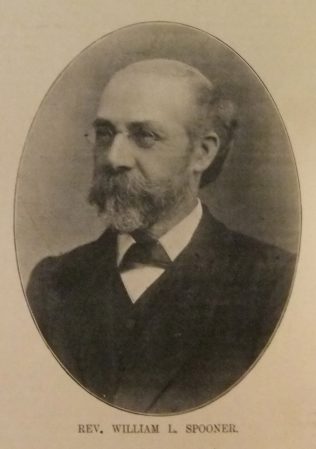 William was born in 1849 at Lyng, Norfolk to parents Jabez Spooner and Mary Loveday. His father was a local preacher and became a Deed Poll member of Conference. His brother Jesse was also a PM Minister.

William started to preach in his teens in the East Dereham Circuit.

The Article in the 1930 Primitive Methodist magazine, entitled ‘What I Remember’ provides a detailed summary of William’s early ministry.

Before staring at the Sunderland Institute, William spent a few months in Bristol to supply for Rev. Joseph Best.

During the third year of William’s stay at Pontypool there was a big coal strike, which upset the circuit from end to end. Many families moved away and numbers declined. A loss of seventy had to be reported.

Bricks and mortar, business details and committees were not exactly to his mind, though William was attentive and methodical in business affairs, but his great joy was to declare the truth as it is in Jesus. William was essentially a student and a preacher.