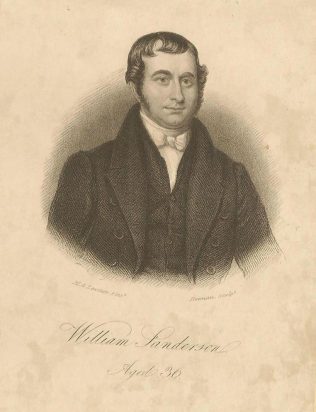 William was born at Harswell, Yorkshire, on 2 February 1803.

William was apprenticed to a thriftless tailer and draper who also kept a public house. He was converted in 1820. Kendall writes; ‘ He attended a camp meeting in the Gravel Pits at Market Weighton in the summer of 1819, and in February, 1820, he found salvation in the Warter Wesleyan Chapel, where, at that time, our people worshipped.’

William made his first attempt to preach at Pocklington. It proved an inglorious effort. He wrote; ’As soon as I opened my mouth I shut me eyes, and when I opened my eyes I shut my mouth.’ Yet this nervous youth became one of the most distinguished PM preachers of his day. He is remembered as the ‘Silver-tongued Orator’. He was known to deliver a ‘glister’ – a bright or scintillating sermon, which was an incidental tribute to the piercing insight which held audiences spellbound.