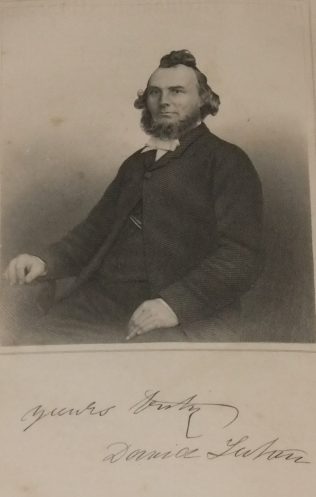 David was born at Whitehaven circa 1814. His father, David, was a rope-maker, originally from Scotland. His youthful life was spent in Whitehaven with a year or two on the sea.

He was converted in early manhood and joined the church in Whitehaven. He was sent by his company to Douglas, Isle of Man, to carry out some special work, but stayed longer.

In his first year of probation, spent at Douglas, David had a ’sense of unfitness for the work’ and several times thought of returning to his previous, better paid, work. However, he persevered.

Whilst at Bradwell in 1845 a new chapel was built. David’s two years ministry at Bradwell were very successful, so much so that he earned for himself the honourable title of ‘Apostle of the Peak’.

In 1870 the chapel at Laxey, called Minorca, was opened; the Rev. David Tuton preached the opening sermon during the District Meeting in Douglas.

Over 42 years as an itinerant, he saw an increase in membership of 1373 across his stations. His obituary records; ‘As a minister, he was pungent in rebuke, fearless in his denunciation of wrong, calm and strong, kind and just in administration, and most effective in preaching.’

The Rev. W D Judson wrote; ‘His magnificent physical appearance marked him off from ordinary men. The strength and peculiarity of his mental constitution made him distinguished as a preacher, and his deep spirituality elevated him above the level of a common Christian experience. He was very popular as a preacher and platform speaker; his experience of the sea made him especially so in Liverpool and the neighbourhood, where his descriptions of the seafaring life and the interests and experiences associated therewith, given his own graphic and inimitable style, were greatly appreciated.’

W Curry, The Story of Primitive Methodism in the Isle of Man, 1907