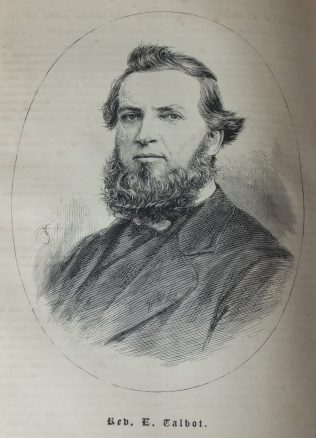 Ephraim was born on 10 September 1826 at Grange, Lincolnshire to parents John and Emma. His father John was a husbandman.

Ephraim was converted in his teens at Misterton in the Gainsborough circuit. He immediately started working in Sunday School. This would be a continuing emphasis through his ministry.

In 1850, Ephraim supplied for William Sanderson at Doncaster. He came friendly with William’s daughter Rebecca, a friendship that led to marriage on completion of his probation.

His obituary records that as a preacher Ephraim was calm, quiet, plain, practical and truly evangelical.

Thomas Whittaker writes; ‘Mr Talbot was a hard-working, painstaking, plodding man; never very strong, but always steadily going along, his heart and his hand always on the work. He was a good contriver, laid down plans in his own mind, then worked thereon with a will.’