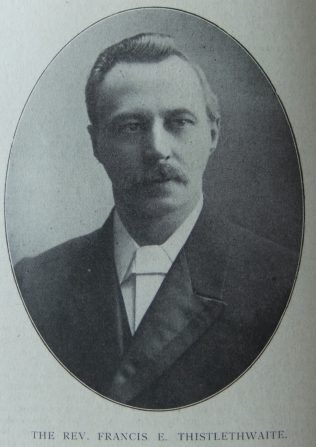 Francis was born in 1867 at Burnley, Lancashire, to parents John and Alice. John was a cotton weaver whilst at Burnley and later a leather warehouseman.

The family moved to Bramley in 1882 and became associated with Moriah Church in the Leeds V circuit. Here Francis dedicated himself to Christ and when barely seventeen, he received a note to preach from Rev Benjamin Bell.

The 1881 census describes Francis as a leather dresser. At that time the family were in Hunslet, nr Leeds.

His obituary records that by nature, Francis was shy and retiring; friendships were not easily formed, but when they were they were lasting. He had an eager mind and his book-shelves revealed that he had cultivated a literary taste. He was an evangelical preacher, a faithful pastor and a wise administrator.

Francis was supported in his ministry by his sisters, first Sarah and later Minnetta.