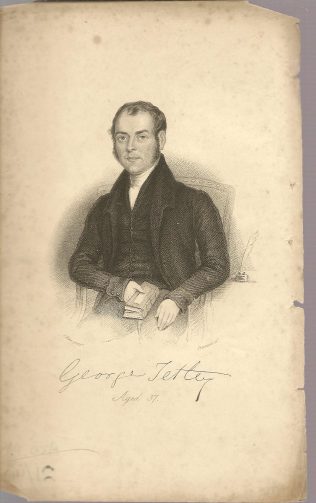 George was born on 30 November 1800 at Cleckheaton, Yorkshire. His parents were Samuel and Betty Tetley. George was baptised on 26 December 1800 in a congregational chapel in Cleckheaton.

Petty relates that whilst stationed at Yarmouth in 1833, George and William Bowthorpe carried out effective open-air preaching and opened many new places. This included establishing a mission at Ipswich. In 1834, conference stationed 5 ministers in the Yarmouth circuit, previously there had been just two, as a result of the increase in numbers.

Petty also records the impressions of a Baptist minister at Bury St Edmunds who recognised that the open-air preaching of the PM preachers, including George, had a positive effect on the numbers active in other denominations.

George was President of Conference in 1855.

H B Kendall, Origin and History of the PM Church, vol 2, p21