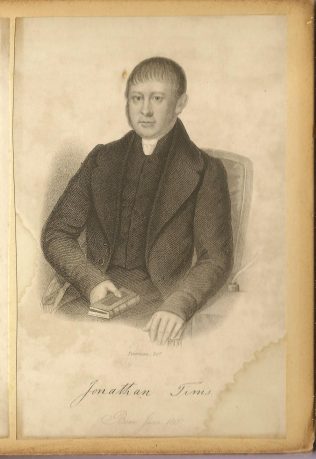 Jonathan was born on 28 June 1800 at Leicester to parents James and Elizabeth.

Jonathan Tims was called out by the Loughborough Circuit in 1823, and was still further linked to that circuit by his marriage with Miss Rachel Tacey, whose name will be found in the list of women at the bottom of the 1822 Plan. He has been described as “methodical, industrious, plodding.”

The development of the Primitive Methodists did not always go smoothly. Kendall relates the story of Dead Lane Chapel in the Loughborough circuit. “ When, in 1819, the deed of Dead Lane was executed, there remained a consolidated liability of £250 which John Benton undertook to meet, and he thus became mortgagee. Let it be told to his credit that next to the brothers Bourne, he was in the first years a financial stay and help to the Connexion.” The work fell into decline, partly as a result of the local economy. “As the result of alterations effected in the fabric some twelve years after erection, and of arrears, the entire indebtedness reached £450. No evidence is forthcoming to show that John Benton, as mortgagee, was any other than considerate; but though successive ministers, and especially Jonathan Tims, struggled desperately to retrieve the situation, the end came at last; and John Benton was requested to sell the chapel with all speed. This was, done and Dead Lane was demolished; but the society, undiminished in numbers, kept together and worked on in lodgings for a few years until, under the superintendency of William Jefferson, in 1848, the Connexional property in Swan Street was acquired.”