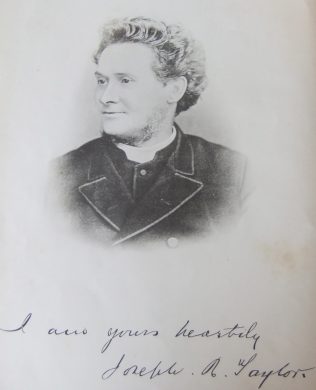 Joseph was born on 15 October 1837 at Rounds Green, Worcestershire.

Joseph’s childhood home was the place of refreshment for preachers. His father was a trustee of the Round’s Green PM Chapel.

Joseph was converted aged about 18 and became a Sunday School Teacher. He was put on the plan by Rev Philip Pugh, who, in subsequent years, became his ministerial examiner and guide.

Joseph’s style as a preacher was popular, anecdotal, and often eloquent. He never knew the sorrow of reporting a decrease.

On his way home from the Conference held in Chester, as the express train entered the tunnel at Oakengates, Shropshire, Joseph went to lift the window with one hand, the other being full of biscuits and a copy of ‘Great Thoughts’. The door of the carriage being unlocked, he fell through, and suddenly entered upon the life eternal.

Joseph died in 1894 at Oakengates, Shropshire.