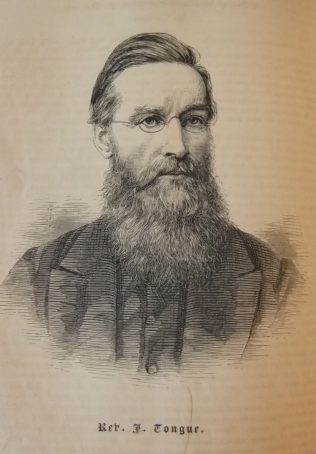 Joseph was born in 1833 at Fulbeck, Lincolnshire to parents John Tongue and Elizabeth White. John was a farmer and Joseph worked on the farm before entering the ministry.

Joseph went to East Stockwith Primitive Methodist Sunday School. He was converted in a cottage service at Blyton Carr. This triggered a desire to study further.

Many times when going to the plough, he would take his book with him, fasten it on the plough, and master its contents as he went along.

Joseph soon went on the plan and became a ‘most acceptable’ local preacher. He went to the Hull circuit at a hired local preacher before going to Brigg as a probationer.

Whilst at Cambridge, Joseph worked strenuously, alongside his circuit responsibilities to secure a B.A. degree.

After superannuating, Joseph moved to Brixton as Principal of the Brixton College for boys. He moved back to Alkborough and then, around Easter 1903, he moved to Scunthorpe to establish a high class school for boys.

James Shaws writes; ‘In motive, gentlemanly bearing, and real Christian life, he was a true man of God. The theme of his ministry was “Jesus Christ and Him crucified”, and this was also the subject of many delightful conversations.’