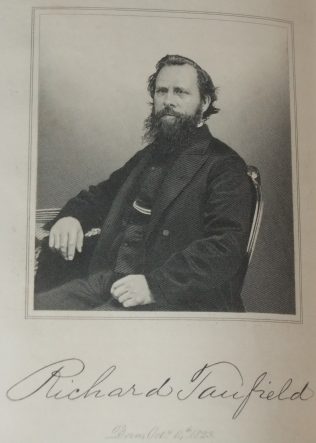 Richard was born on 14 October 1823 at Thirsk, Yorkshire. His father was for many years a Methodist class leader, choirmaster and Sunday School Superintendent.

Richard was converted aged 13 under the ministry of Joseph Spoor and joined a PM society.

During apprenticeship to a bookseller, Richard gave himself, with great indulgence, to the study of English Literature, Latin, Greek and Hebrew.  He became a local preacher when he was 20 years old.

Richard’s sound business training and extensive reading led him to occupying many important posts. He sat on the Conference Committee that instituted the PM Sunday School Union. He spent 20 years on the Ministerial Candidates Examining Committee. On superannuation in 1888, Richard became Treasurer of the Conference Fund.

His obituary records; ‘For the pulpit he made most conscientious and thorough preparations and was distinctly evangelical and always thoughtful and persuasive. Much originality and breadth of thought and a rich view of humour marked his pulpit and platform utterances.’