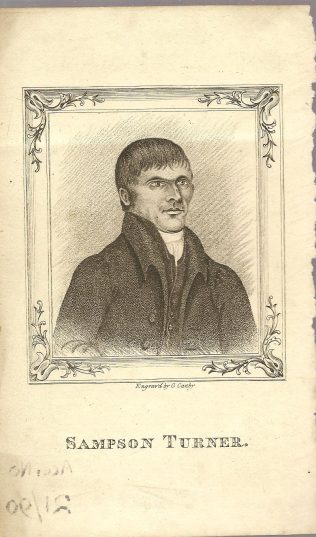 In March 1819, Sampson commenced his missionary work at Bilston and was well received. The following day he went to Wolverhampton, but received much verbal abuse. The following day at Willenhall stones were thrown at him and he was obliged to depart. Sampson relates that this was not universal and in many places converts were made.

Whilst on a long ‘circuit round’, Sampson joined with John Wedgwood for three weeks in his ministry to Cheshire in 1819. (See an extract of his journal relating to that mission.)

Kendall relates that the Tunstall circuit had grown so large by the end of 1819 that in March 1820 a new circuit was formed based around Darlaston. The remaining circuit was split into six branches; Tunstall, Ramsor, Belper, Burton on Trent, Burland and Preston Brook. Organisation of the preachers had to follow. In two short months, Sampson Turner had to walk to appointments at places so far removed as Cannock, Burton on Trent, Macclesfield, Talke and Northwich. A better system emerged with preachers allocated to a branch for a period of time before being moved around.

In 1820 Sampson was sent to mission the area around Burton on Trent. He also preached in Lichfield on Whit-Sunday 1820.

Like many of his colleagues Sampson had his hardships. Of his visit to Tutbury he tells us that on entering the village rotten goose-eggs were thrown at him. He was so besmeared that he was obliged to borrow a coat in which he preached while his own was rinsed and dried. His own simple comment is, ‘Persecution raged in several places but the word of the Lord ran and was glorified, and many sinners were converted to God. To Him be all the glory.’

Sampson was one of the 12 permanent members of conference named on the Deed Poll in 1830.

Thomas Bateman described Sampson as follows; ‘a plain, good preacher, not so noisy as some’.

Sampson continued his ministry covering much of the north of England during a forty year period, supported by his wife, before retiring in Sunderland in 1860.

Author’s Note: The circuits recorded in Leary do not correlate with the location of Sampson Turner at the time of the 1841(Westgate) and 1851 (Easington) census returns. It seems likely that the stations for Sampson in the period 1833 to the mid 1850’s have been ascribed to Samuel Turner and vice versa. The above list of circuits has been modified to correct this inconsistency.