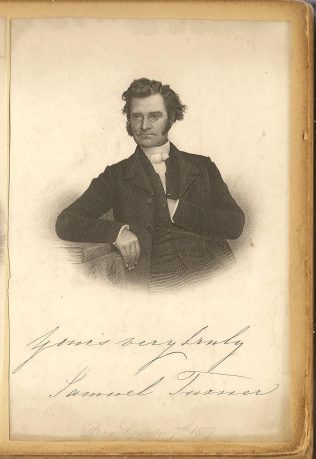 Samuel was born on 7 September 1807 at Stone, Staffordshire.

Petty relates that in June 1832 Samuel and James Baker were appointed to visit Chippenham and other places south of Brinkworth. The missionaries started on 7 July at Castle Coomb. In the evening they had a large congregation, though they were somewhat annoyed by a few drunken men!

Whilst initially they had opposition in gaining permission to preach in Chippenham, persistence and a meeting with the magistrates enabled them to preach. A society was formed and the Friends meeting house was purchased to allow a permanent place of worship.

At Marshfield, a small town about seven miles from Bath, the missionaries encountered much persecution. On 30 July, one person threw water over Samuel as he was preaching. Another attempted to throw fire upon him and a publican employed several young men to drive two carts through the congregation in order to disturb them.

By 10 December, thirteen places had been established for preaching, three in market towns and there were over 100 members in society. This built the foundation for Chippenham to become the head of a circuit within three years with 350 members, employing three travelling preachers.

In the summer of 1833, Samuel was chosen by the Brinkworth circuit to partake in a mission to Bristol. He went with Samuel West. They managed to be more successful than those who had gone before them and within six weeks had rented a small chapel called ‘Dolman’s Chapel’ which was opened for worship on 25 August.

Samuel became a stationed travelling minister from the Conference of 1833.

Samuel was married to Ann Wheildon (1809-1898) in the summer of 1838 in the Birmingham Registration District. Census returns identify seven children.