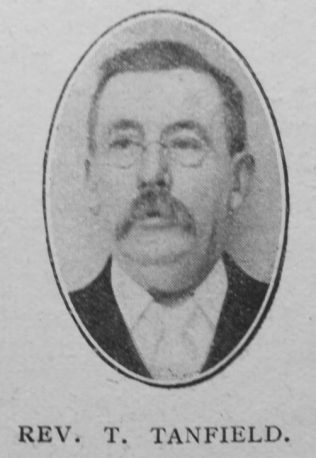 A transcription of obituary published in the Primitive Methodist Magazine by Herbert Hedges is attached. He records the following.

“Preaching was the joy of his life, He loved to exalt his Lord before the congregations. It was pathetic to see his grief when the doctor told him three weeks before the end that he must preach no more. His sermons, which were carefully prepared, and abundant in rich thought, revealed a well-furnished mind. There was a clear evangelical ring in his preaching, born of a passionate love for Christ and his fellow-men. He knew in whom he believed, and in consequence was able to persuade others to believe. His life gave a note of authority to his preaching. He not only told the truth, but he made the truth tell by the charm of his personality. “

Thomas was born on 5 June 1849 at Halifax, Yorkshire, to parents Richard Tanfield, a PM minister, and Isabella Simpson.

He married Esther Rhodes (1851-1904), in the summer of 1875 at Bradford, Yorkshire. Census returns identify three children.