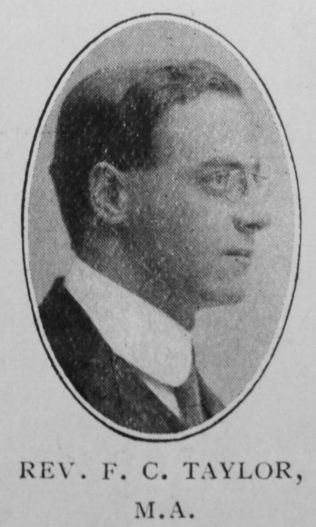 FREDERICK CLIFFORD TAYLOR, M.A., B.D.: born in Queensland, Australia in 1888, the son of a Primitive Methodist minister who had gone out there a few years earlier. Eventually he too was trained for the Primitive Methodist Ministry, at Hartley College and Manchester University. Leaving college in 1913, he ministered successively in Stockton-on-Tees, Glasgow, North Shields, Leeds, Blackheath, and Pontefract.

His sermons were characterized by deep religious insight and clarity of presentation, and were delivered with a warmth of evangelical appeal unmarred by sentimentality. His prayers were a markedly helpful feature of his pulpit ministrations. He was keenly interested in young people, and constantly sought to encourage and help Sunday-school teachers. He was invited to deliver the Morse Lecture at one of the triennial Sunday-school Conferences arranged by the Primitive Methodist Church, and the resulting book, The Teaching Mission of the Church (1932), was used until recently as a textbook for the Sunday-school Teachers’ Diploma.

When Methodist Union was consummated in 1932, he was appointed, because of his enthusiasm, acumen, and vision, a Secretary of the Connexional Sunday-school Department, his main responsibility being the oversight of teacher-training. For several years he delivered courses of lectures at Hartley College on ‘Religious Education and Sunday-school Method ’. He was a valued member of the British Lessons Council, and served as secretary of the committee responsible for drafting courses for young people aged fourteen to eighteen. At the setting up of the new Methodist Youth Department in 1943 he returned to circuit work, serving in London, and then Great Harwood.

During his retirement he continued to preach and to serve on committees in connection with the Methodist Youth Department and the British Lessons Council. His mind continued alert and eager, and was constantly renewed by wide and deep reading.

He died on 5 November 1958, aged seventy, in the forty-sixth year of his ministry.

The Teaching Mission of the Church (Morse Lecture 1932)

Frederick was born on 10 June 1888 in Queensland, Australia, to parents Joseph Alfred Taylor, a PM minister, and  Phyllis Hannah Northwood. His brother, Ewart, was also a PM minister.