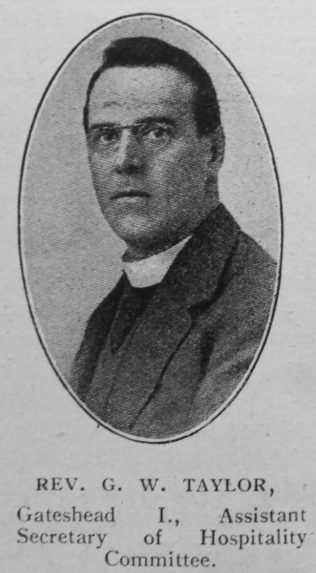 GEORGE W. TAYLOR: who was richly endowed by birth and training and kept nothing back in his consecration. The Ministry possessed him. He had outstanding characteristics of body, mind, and heart. He faced the world and life fearlessly. People turned to see the courage in his eye and the firmness of his step. And these were typical of the uprightness of his mind and the valour of his heart. He was an adept in business and methodical to the last degree. The transparency of his character was evident. He loved nothing but goodness. His sincerity in the pulpit gave him power.

People knew that what he said had first of all been given to him by God. “He carried his shrine with him.” His colleagues found him manly, frank, and true. Never hiding his convictions, he gave others credit for equal sincerity. Those in doubt and need turned naturally to him. He knew his people in their homes and they knew him. He had the art at once of entering into every human need. People found ease and strength in his presence. In all his circuits he was an evangelist and a true soul winner.

He died on April 15, 1933, in the forty-eighth year of his age and the twenty-first of his ministry, leaving deep and lovable impressions.

Wilfred was born abt1886 at Sandal Magna, Wakefield, Yorkshire, to parents George Taylor, a yeast importer (1891), and Elizabeth Ellen Blacker.

Before entering the ministry George worked as a grocer’s assistant (1901).

He married Mary Hannah Jopling (b1888) in the spring of 1916 in the Hunslet Registration District, Yorkshire. Census returns identify two children.