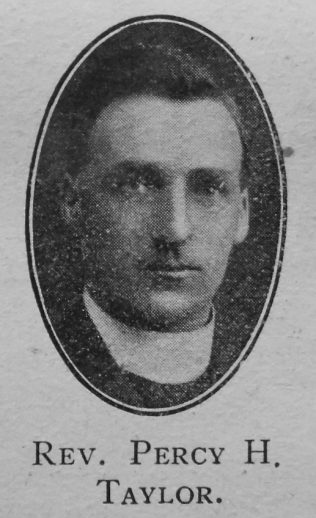 Transcription of obituary published in the Primitive Methodist Magazine by J.T.R.

Percy H. Taylor passed into the Homeland on Tuesday, May 27, 1924. He died in the sixth year of his ministry. Born 1884, at Tunstall, Staff., he was nourished in the atmosphere of a Primitive Methodist home, and early in life became a member of the Church at Knulton, Silverdale Circuit. He became a local preacher in his teens, and to the eyes of the truly observant gave promise of distinctive service in the Methodist pulpit. The way opened for him to take a course of studies at Cliff College, under the late Rev. Thomas Cook. No man enters and leaves Cliff College without receiving a peculiar stamp. Percy Taylor came out of Cliff College with fires kindled which were to glow and increase in intensity until the moment of death.

From Cliff College he went North, where in numerous churches on the banks of the Tyne, he conducted Missions with remarkable power, and which were attended with permanent results. He personally was magnetism itself. Tall in stature, noble in appearance, able at any moment to break out in rapturous song, he soon gathered and retained with ease an audience within, or without in the open air.

During his Mission on the Tyneside he met the lady who was destined to be his wife, Miss Langlands, the daughter of a well-known farmer, Mr, Ralph Langlands, of Bearl Farm, Stocksfield. From the Tyneside he went to Cornwall, and from there in 1912 went out to Australia as a Missioner with a batch of Cliff College students. He remained in Australia five years, dividing his time between studying at the College and preaching. The last year of his stay in Australia saw him honoured in being chosen to act as assistant to the President of the Wesleyan Conference.

Returning to England in 1916, he rejoined the Primitive Methodist Church, and was called to serve as Lay Agent at Orpington, in Bromley Circuit, Kent, where he had a very remarkable ingathering of souls. During his two years at Orpington he married, and in 1918 was sent to superintend Sheerness Circuit. He found the circuit difficult to work, largely owing to war conditions, but with the hearty co-operation of his wife, he boldly went forward and during his three years saw a great quickening of spiritual life. From Sheerness he returned to Orpington, where the last year of his probation was completed. Ordained at the Worthing Synod, he was appointed by the Conference of 1922, to superintend Farringdon Circuit. Here he threw himself with his old time enthusiasm into the work, winning respect, reverence and love throughout the whole station.

But his days were numbered. Taken ill in December. 1923, he heroically struggled on until January. The best of human skill was exercised on his behalf, but of no avail. No man faced death more heroically. A little before death he once more broke out in song:—

“I’ll praise my Maker with my breath,
And when my voice is lost in death
Praise shall employ my nobler powers:
My days of praise shall ne’er be past
While life, and thought, and being last
Or immortality endures.”

He was laid to rest in Farringdon Graveyard. The Rev. Edward Clements, secretary of the Brinkworth and Swindon District, was in charge of the funeral services, and the writer gave the address. A large number of ministers were present with the local clergy, the officials and members of the circuit churches. In the death of Percy Taylor, the Church has lost one who would have been had he lived one of its most successful evangelists within the ranks of its ministry.

Percy was born in 1884 at Tunstall, Staffordshire, to parents Levi Taylor, a coal miner and Rachel Tomkinson.

Before entering the ministry Percy was a steam hammer driver (1901).

He married Ellen Longlands (b1888) in the summer of 1917 in the Hexham Registration District, Northumberland. Birth records identify two children.