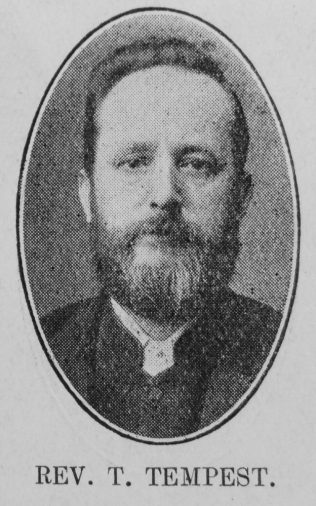 Transcription of obituary published in the Primitive Methodist Magazine by W. Fidoe

It is with deepest sorrow that we record the death of the Rev. T. Tempest, the esteemed superintendent minister of the Tadcaster Circuit, which occurred at the Nottingham Hospital on January 22nd. He was born at Spennymoor in the county of Durham, on September 22nd, 1851. His parents were respectable, industrious people. When he was very young the family removed to Coxhoe, where our departed friend resided for many years. His facilities for education were limited, for at ten years of age he left school, commenced work and contributed his mite towards the support of the home. In his boyhood he was profoundly impressed by the earnest ministrations of the Rev. J. Spoor, for whom he had a high regard.

Our brother was converted under the ministry of the Rev. John Magee at Coxhoe Chapel. The reality of his conversion was evidenced in his spiritual growth and devoted work. As a Sunday School teacher he rendered excellent service. He was an enthusiastic Temperance worker, and became a Good Templar. The leaders recognising his gifts and graces recommended him as a suitable person for the plan. For more than two years he laboured in the Thornley Circuit with increasing acceptance as a local preacher. Receiving a call to the ministry he spent a year at the Theological Institute, Sunderland, and entered upon the great work of his life. Our brother laboured with considerable success for nearly thirty-five years on the following stations: Wirksworth, Burton, Sleaford, Bedford, Aylsham, Soham, King’s Lynn, Harwich, Thirsk, Newark, Mansfield, Keighley Il., and Tadcaster.

His ministry was effective and fruitful, His sermons were instructive, evangelical and practical. As preacher, administrator, and pastor he laboured to promote the varied interests of his circuits. As a colleague he was loyal, considerate, and brotherly; an example of manly piety, untiring industry and unfailing courtesy. The interment took place at Kimberly Cemetery on January 26th. There was a large representative gathering. The service was held in our chapel, conducted by the Rev. J.H. Hemshall, who delivered a touching address in which reference was made to the character and service of the deceased.

We commend the bereaved widow and family to the comforting and sustaining grace of our Heavenly Father.

“Soldier of Christ, well done!
Praise be thy new employ;
And while eternal ages run,
Rest in thy Saviour’s joy.”

Thomas was born on 22 September 1851 at Spennymoor, Co. Durham, to parents William Tempest, a coal miner, and Mary Owen. He was baptised on 25 April 1854 at Durham.

Thomas also worked as a coal miner before entering the ministry.

He married Mary Elizabeth Northwood (1858-1941) in the summer of 1880 at the PM Chapel, Ilkeston, Derbyshire.  Census returns identify seven children.