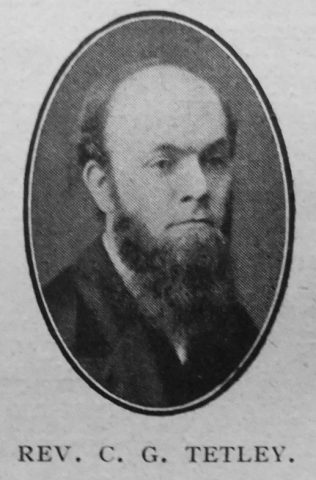 A transcription of obituary published in the Primitive Methodist Magazine by H.Y. (Henry Yooll) is attached. He includes the following.

“He was a most reverent and intelligent student of the Bible, and a profound believer in the reality of the spiritual and unseen. He could never be an agnostic, his feet were too firmly planted on the Rock for that, and it was his joy to prove the highest truths on the pulses of his soul. Yet he was broad and open-minded, sought ever to get at the heart of things, and particularly in his later years was wonderfully optimistic. His interest in current affairs both in the Church and the world was both keen and wide.“

Charles was born in the summer of 1843 at Walsingham, Norfolk, to parents George Tetley, a PM minister, and Anne Fenton.

He married Luanne Sabine Reeve (1848-1928) in the summer of 1871 in the Norwich Registration District, Norfolk. Census returns identify six of seven children.