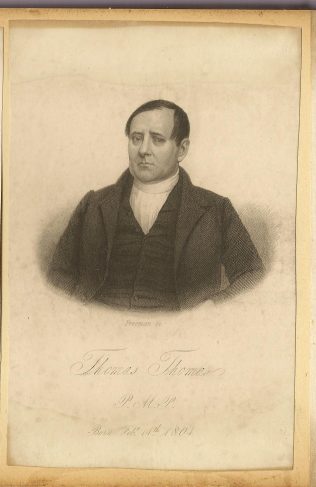 Thomas was born on 19 February 1804 at Bradley, Staffordshire, to parents William and Sarah. He was baptised on 22 April 1804 at Bilston, Staffordshire. His parents were Wesleyan. Sarah died when Thomas was about eight, and his father drifted from his faith. In 1820, the family moved to Codnor Park, Derbyshire and it was here that Thomas came into contact with the Primitive Methodists. He had his conversion experience on 19 August 1821. In June 1822 he went on the plan as an exhorter. He became an itinerant minister in 1824.

In his obituary it is recorded that in 1841 he was the first married minister at Peterborough when he arrived with a wife and five children. The circuit had to find suitable accommodation and did not have sufficient money to pay him. His wife had to earn additional money to keep food on the table for his family.

Thomas died on 26 November 1866 in Stepney, London on a visit to his son and was buried at Boston, Lincolnshire.