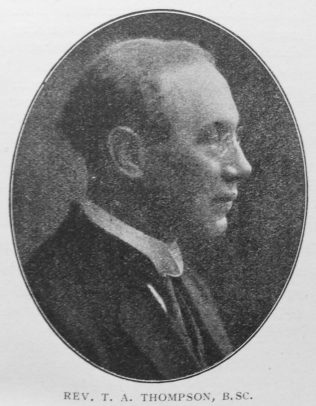 T. ALEXANDER THOMPSON: son of the Rev. John Day Thompson, who succeeded Hugh Gilmore at North Adelaide in 1891. Here the son had a brilliant school career, and took his B.Sc. at the Adelaide University. He entered Hartley College, Manchester, in 1898, and two years later began his ministry at Motherwell.

Though shy and retiring, he was responsive to the smallest kindness. His gracious personality won the affection of his people in all his circuits. He had all the habits and instincts of a born student, and a mind eager to enter unexplored avenues of thought and truth. His pulpit utterances were always touched with freshness and originality, and made a strong appeal to the more thoughtful members of his congregation. He had a quiet, undaunted courage and remained undismayed throughout an experience that would have shattered more stalwart men. For sheer unostentatious competence he stood apart, and his name recalls a man of simple heart and a gracious and lovable personality.

He died on June 4, 1932 in his fifty-sixth year, after a prolonged illness bravely borne.

Alexander was born in 1876 at Sunderland, Co. Durham, to parents John Day Thompson, a PM minister, and Sarah Large.

Alexander died on 4 June 1932 in the Stockport Registration District, Cheshire..