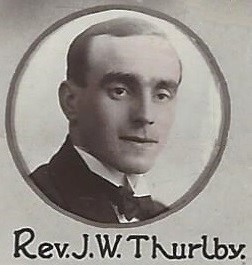 JOSEPH WILLIAM THURLBY: born at Crook, Co. Durham, in April 1898. He grew up in the Primitive Methodist Church, and caught not only the fervent evangelical fervour of his compatriots and contemporaries, but also the burning social conscience that marked the great preaching of the grim post-war days in that area.

His ‘call’ to the Ministry had as a perfectly natural accompaniment a zeal to translate this ministry into positive social action. There was a mood of militancy about him that remained to the end of his life. In the early days he had thoughts of embarking on a political career, and in fact contested a seat on the Durham County Council, coming very near to unseating the sitting member, a local and titled landowner. His political aspirations issued from his burning zeal and concern for people. His strong sense of justice and social concern continued to the end, although his faith in the regenerative powers of human nature had long since been transmuted into a new and more dependable faith in God to redeem all things unto Himself.

Following a pre-collegiate year at Huddersfield, he was trained at Hartley College, and subsequently served at Huddersfield, Grassington, West Auckland, Hadnall, Wensleydale, Clayton West, Halifax Ebenezer, Midsommer Norton, Thornley, Consett, Wigan, Heckmondwike, Watton, and Ebbw Vale. On his retirement in 1963, he came to live in the Leeds (North-East) Circuit, and he continued to take appointments throughout the circuit until his death.

He died suddenly on 4 July 1968, in the seventy-first year of his age, and the forty-fifth of his ministry.