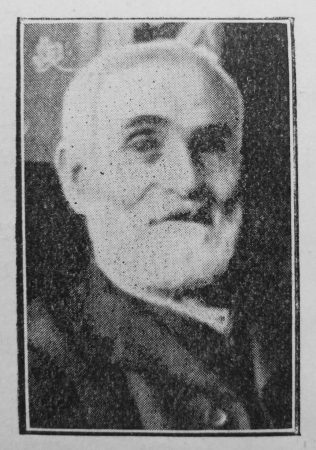 Transcription of Obituary in the Primitive Methodist Magazine by Joseph Trevett

Early on January 20th, 1907, Joseph P. Tiplady passed away. Born in Sunderland, December, 1830, he was converted when about twelve, and at the ensuing school anniversary was appointed to recite a sermon. When he stood up, however, the sermon was forgotten, and instead he gave his testimony and an impromptu exhortation. He was preaching when only sixteen and soon afterwards entered the ministry. He travelled in Middleton-in-Teesdale and Berwick. He often walked twenty miles to an appointment and the same distance back. He preached, too with extraordinary abandon, and would often thrill his hearers with the single word, “Oh.” His strength was not equal to the tax made upon it, and he was compelled to retire from the ministry. He returned to business in Sunderland and to the work of a local preacher, his entire record covering sixty-three years. He was in great request for special services.

In 1856 he married Miss Brown, of Northumberland, who made him an excellent wife. Under her influence he returned to the north where he was for many years a well-known farmer. His home was open to both ministers and laymen and often the young ministers spoke of Mrs. Tiplady as “a real mother.”

In 1891 he retired from farming and removed to Sunderland. Within a year he lost his wife, and some years ago married Mrs. Worthy who nursed him with great devotion in his last illness which covered a period of three years. Even when confined to his house he took a deep interest in Connexional affairs, and for fifty years took the Conference Minutes which in later years he was particular to have “in cloth.” In the ministers and their work he was always greatly interested. He delighted to tell of the trials and triumphs of the old days, and latterly seemed on the very borders of heaven. His great ambition was to be a Deed Poll member, but when within sight of the coveted honour he was struck down with severe affliction. He was several times delegate to Conference and a frequent visitor to our annual assembly. In him Primitive Methodism has lost a man of the type whose single-hearted devotion has made her what she is.

He was laid to rest in Bishop Wearmouth cemetery. May his widow, his two sons, and two daughters, be divinely comforted and sustained “till the day break and the shadows flee.”

Joseph was baptised on 9 January 1831 at Bishop Wearmouth, Co. Durham. His parents were Thomas, a joiner, and Isabella.

He married Mary Ann Brown(1835-1892) in the spring of 1856 in the Glendale Registration District, Northumberland. Census returns identify three children.

He married Elizabeth Worthy, nee Sowerby (abt1844-1918) in the summer of 1894 at Sunderland, Co. Durham. She had a daughter by a previous marriage.