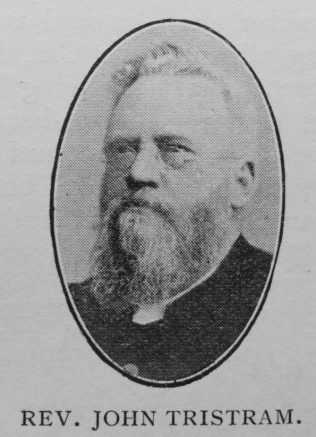 If there is anything in heredity it is proved conclusively in the subject of this sketch. His parents and his grandparents on his mother’s side were among the pioneers of our Church in the interesting town and neighbourhood of Ludlow, Salop. It was the proud joy of his parents—James and Jane Tristram—to entertain Hugh Bourne on more than one occasion when on his preaching tours, and also to wash the blood-stained feet of that much-travelled man.

John Tristram was born on April 16th, 1838, and was the oldest of four sons, all preachers, two of them entering the ministry. When quite a boy he decided to serve the Lord Jesus Christ. Being of an ardent temperament, he served the Lord with fervour, and soon disclosed to discerning minds, the possession of rare gifts. Very quickly he was called upon to take up the work of preaching, and so acceptable were his labours in this capacity that before he reached the age of twenty-one he was in the ministry of this Church.

On January 12th, 1859, he commenced his labours as a travelling preacher on the wide Dawly Circuit. Circuits were such in reality in those days as well as in name. Frequently he had to walk fifteen and twenty miles to an appointment. Blessed with a magnificent constitution he rather revelled than otherwise in the excessive demands made upon his physical strength.

After being in the ministry six years he married Mary Ann Rawlings, a Sunday School teacher and active worker in his home Church. For over forty-six years she shared with him all the experiences associated with the many-sided character of a minister’s life and work. And never was husband served more devotedly or helped more consistently.

For the long period of forty-six-and-a-half years he continued in the active work of the ministry. The Circuits travelled were in Shropshire, Cheshire, Staffordshire, Yorkshire, and Derbyshire.

At the Conference of 1905 he settled down in Birmingham, taking the pastoral oversight of a new cause in Springfield Road, Moseley. Here he laboured with much acceptance and success until last September.

As a preacher he was pictorial in style, evangelistic in method, tremendously in earnest, and very much alive. To some who knew him intimately and heard him frequently he was the greatest open-air preacher they ever listened to. Possessing a magnificent voice, which he knew well how to use, an attractive personality, a popular style, he could arrest and hold the attention of a crowd in Market-place and on Camp-ground with few equals.

It ought to be said of him that he was pre-eminently an evangelist, and as such was used on, all his Circuits, without exception, in winning many to Jesus. His converts are a mighty host.

Rev. Arthur Jackson Smith, who travelled twice with him, says: :He was one of the kindest of men, loyal and true, and generous in thought and speech. If there was a long journey or an unpleasant task to be undertaken he was always the first to volunteer. I shall always think of him with profound respect. He was a good man, and a man of great ability.”

As a Temperance advocate and progressive in politics he worked incessantly. There was never any doubt as to where he stood, what he thought, whither he aimed. At the same time it is questionable whether he was ever known to make a direct allusion to any political question from the standpoint of a partisan in the pulpit. On the platform he was fearless, convinced, mighty in advocating every question respecting the welfare of the people. Of his fourteen children, who are all members of the Church, one is in the ministry, two are lay-preachers, all the others earnest workers in some department. Of his grand-children one is a local preacher, to whom the Church has recently extended a call to prepare himself for the ministry.

On Sunday, January 15th, after a comparatively short illness he put on immortality. On January 18th a beautiful memorial service was conducted by Rev. J.H. Saxton, in the Springfield Road Church, in which Rev. I. Dorricott, an old friend of the deceased, gave a very suitable address. He was followed to the grave by the widow, thirteen children (one being away in Africa), two brothers, Rev. James and Mr. Wm. Tristram, two grandchildren, and other relatives, numbering in all twenty-four, beside many friends. We laid his earthly remains to rest in the Yardley Cemetery.

John was born on 16 April 1838 at Ludlow, Shropshire, to parents James Tristram and Jane Russell. His brother, James, was also a PM minister.

John died on 15 January 1911in the Solihull Registration District, Warwickshire.