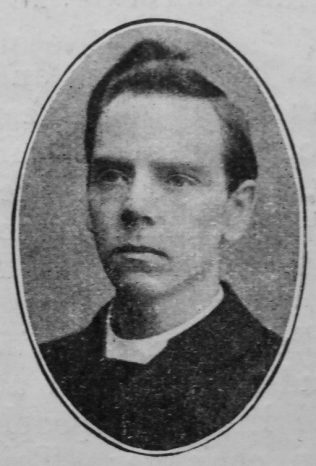 Transcription of obituary published in the Primitive Methodist Magazine by S.A. Barron

The death of the Rev. Thomas James Turley at the age of thirty-four years, has caused deep grief to a wide circle of friends who loved him for his excellencies, and hoped much from his consecrated gifts. The early termination of so bright and promising a career is a painful mystery. We had hoped that the shadow of pain and weakness might be lifted, and that he might yet resume the ministry for which he was so richly dowered. But it was not to be; and on Sunday morning, December 8th, 1907, the “long fight of afflictions” ended, and he entered into the “Sabbath rest” that remaineth for the people of God. ,

Our friend illustrated the righteousness that is “unto children’s children.” His grandparents on both sides were devoted Primitive Methodists. His father, the Rev. Josiah Turley, is a minister, “whose praise is in all the churches”; his mother, a minister’s wife of ideal devotion and usefulness, and a speaker of great ability and power. Mr. Turley was affectionately proud of his parents, and in him their best qualities were happily blended. By the grace of parentage, the grace of temperament, and the Grace of God, he was predestined to become “a good minister of Jesus Christ.”

Born in 1873 in London, our friend came in boyhood, through the evangelism of a godly home, to the point of conscious dedication to Christ. During his father’s lengthened pastorate of the Robert Street Church, in the Plumstead Circuit, he became actively engaged in Christian service, first as a Sunday School teacher, and then as a Local Preacher, the latter position being reached when he was seventeen years of age.

Recommended and accepted for the ministry, he spent two years in the Manchester College, under the tutorship of the Revs. J. Wood, D.D., J. Watson, D.D., D. Neilson, B.D., and Professor Peake, M.A., D.D. His intellectual training for the teaching profession in which, prior to his entering the college, he had been engaged, was an advantage to him, and in his studies, “his profiting appeared unto all.” We met him occasionally in his college days, and were impressed with his keenness as a student, and his general mental alertness and strength. There was heart also as well as brain, and a physical vigour that seemed to promise length of days.

The Rev. G. E. Rudram says: “What a grand young fellow he was in those days. Well do we remember his splendid physique, with nearly the strength of two men; his overflowing spirits, his sense of humour, his fondness for manly sports. What a stentorian voice he had, and how it would ring out in the open air missions until the attention of passers by was compelled by the passion of his earnestness. How kindly and open and intense was his disposition.”

Upon leaving College he was stationed in the Bury Circuit, under the able and genial superintendency of the late Rev. Robert Jones, between whom and himself there existed a warm regard. His popularity was immediate and abiding. On his first circuit he stayed for the considerable period of six years. He had a genius for friendship, and made himself generally beloved. Attentive to detail he discharged with competence and success the duties belonging to the “care of the churches.” And in the pulpit it is testified of him that “with a passion that created passion, with fire which spread to others, with a zeal which swept away all unrealities, he made straight the way of the Lord” in the lives of those to whom he ministered. A distinguished career was predicted for him.

The closing days of the Bury period were beclouded by the invasion of the obscure disease which, then temporarily disabling him, has now ended his life. After being laid aside for some time, he was able to recommence the labours of the active ministry. For three years he superintended the Heywood Circuit—the term being most successful. Chapel interests were improved to the extent of £1,000, and many were brought to the Lord. The churches of the Heywood Circuit lay near his heart, and one of his latest prayers was for their young people.

From Heywood he went to the Colne Circuit, and began his work with his usual vigour and enthusiasm. But in his first quarter his former malady returned. During two years all that medical skill and loving care could do was done. But the call had come to higher service. His last audible prayer was, “O Lord, into Thy hands I commit my spirit, for time and for eternity, in that Name which before Thee never faileth.”

In the presence of his father, mother, sisters, and brother, he passed peacefully away, leaving the fragrance of a beautiful spirit, and the memory of a brief, but well spent and useful life.

Thomas was born in late 1873 at London, to parents Josiah Turley and Annie Lee.

He died on 8 December 1907 at Southampton, Hampshire.