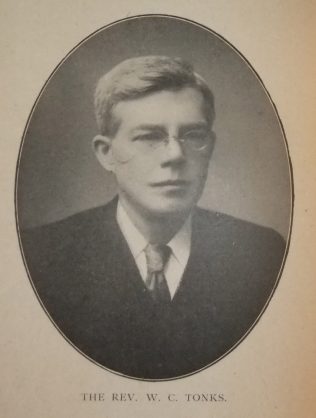 William was born in 1867 at Burntwood, Staffordshire to parents William Cox Tonks and Jane Heatley. His father was a coal miner. The family moved to the South Yorkshire coalfield at Mexborough, nr Doncaster circa 1878.

William joined the church at an early age whilst attending Sunday School at Chase Terrace, Lichfield.

William’s ministry was firstly a ministry of preaching, in which he was original, enthusiastic and practical. To him truth was the foundation of life, and by earnest preaching truth could be displayed and brought to bear on conduct. The ethical note in his pulpit rang clear.

A notable feature of his ministry was friendship, being remembered on all his circuits as a Christian gentleman and genuine friend.

There is no obituary for William in either the PM magazine or Conference Minutes.