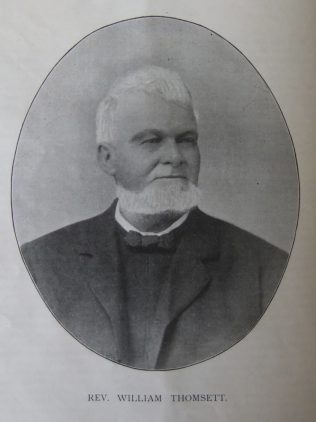 William was born on 1 January 1837 at Milton Regis, Kent to parents Richard and Frances. William was baptised on 12 February 1837 at Milton, Kent.  Richard was a fisherman, who owned a small fishery smack by which he was able to support his wife and ten children. The family had no religious connections.

Between the ages of 7 and 10, William spent the summer months at sea with his father and the winter months in school. He went to sea full-time aged ten and had several close encounters with death during his time as a mariner.

William was converted aged 17 and associated with the Primitive Methodists at Milton Regis.

During his ministry, William built three chapels and carried out many renovations.

As a pastor and minister he was well regarded by his people. His genial and sympathetic nature endeared him to them as he visited them in their homes. When he met them as a preacher and people at Divine worship, his word, so evangelistic in its significance, so fervent in its presentation, was appealing and powerful.

William was averse to publicity in the courts and committees of the connexion. Conferential delegation and secretary-ship had no lure for him – he preferred his immediate task of the circuit.

William married Margaret Bascombe (1844-1925) on 18 July 1866 at Milton Regis. The 1861 census shows her family living next door to William’s family in Milton Regis. Margaret had been a fellow Sunday School teacher with William. They were engaged to be married before he entered the ministry and Margaret agreed to wait four years until they could marry.They had ten children.

Following superannuation, in 1907 William suffered a stroke from which he never wholly recovered. He was nursed by his wife and one of his daughters.